Vaas though was guarded when talking about his own country's chances in cricket's showpiece event.

The former left arm bowler was however guarded when talking about his own country’s chances in cricket’s showpiece event to be held in England and Wales from May 30, while mentioning sling-arm pacer Lasith Malinga as a key factor.

“Indian cricket has been dominating in the last two-three years. They have good back-up fast bowlers. They will do wonders. Indian team is very balanced. They will do well. My prediction is, India will definitely reach the semifinals (in the World Cup),” Vaas told reporters here on Tuesday.

Vaas is on a visit to Mumbai to inaugurate a local T20 tournament along with former teammate, left-arm spinner Rangana Herath. (ALSO READ: King Kohli along with cool cucumber MS Dhoni will bring back the World Cup: Srikkanth)

“They (the Indian spinners) have been playing well, especially (Yuzvendra) Chahal and Kuldeep (Yadav). That’s why they have picked right-arm leg spinner and the chinaman (in the squad) and the other guy also (Ravindra Jadeja)…..and I am sure in the coming World Cup,they will do (give) their best,” said Herath, who has picked 433 Tests wickets.

“You may give extra runs but you need kind of wicket-taking options. That’s why they (the teams) pick the right-arm leg-spinner or chinaman (bowlers),” explained Herath, one of the best left-arm spinners of his times. (ALSO READ: Meet India’s 15-member 2019 World Cup squad)

Herath predicted that there will be a stage in the World Cup where the spinners would come into play. (

“The World Cup will be played all across England. In the later part, there will be some assistance for spinners as well at the same time, you can see some dry pitches as well. I am sure the spinners will get chance at one stage,” he added.

Meanwhile, on Lanka’s chances, Vaas said, “For the last few months, Sri Lanka hasn’t done so well. But if you analyse the combination of the team which we picked for the World Cup, I am pretty sure that the selectors have done the right thing. We have to take it from there and it’s upto the players to get themselves in and play well for the country”.

“There is no doubt that Malinga is one of the best in the world and the best in Sri Lanka. We depend on him as a bowler and he showed his leadership qualities.

“He has given 100 per cent for the team and we have seen, him playing in Mumbai (in IPL) on one day and playing in Sri Lanka (in a domestic event) the next day. It shows the commitment he has, and the commitment he has given to the team and the country. He will be the key for Sri Lanka cricket in the upcoming World Cup,” said Vaas, who has 400 ODI and 355 Test wickets to his credit.

The Sri Lanka selectors have handed over Cup captaincy to Dimuth Karunaratne and Vaas was optimistic that the island nation would stand united behind the new captain and do well in the marquee event.

“Well, it is very difficult to say anything about it because for the past six months we (Sri Lanka) have been selecting captains and the captains havent given anything to the team. We lack in experience and performance in the middle.

“But the selectors and the Sri Lanka cricket have put their trust in Dimuth and given him an opportunity to captain the sid. I’m pretty sure that the team will unite and will do well in the upcoming World Cup,” he hoped.

Vaas also took a dig at the Sri Lankan board saying that the biggest issue was that the selectors are chopped and changed often leading to lack of clear-cut selection policies. ALSO READ: Chaminda Vaas, Rangana Herath call for unity in the wake of Sri Lanka bomb blasts)

“We have talent and we need to give them opportunity to play longer, rather than giving them one or two games and then pushing them out. Players need some time to perform well.

“In Sri Lanka, the biggest problem is that the selectors keep changing. There is no such thing as selection policies. Once they have a policy, it is easy to build the team. That’s the biggest problem we face. Ultimately the players get caught up and they are suffering. You need to show faith,” Vaas signed off. 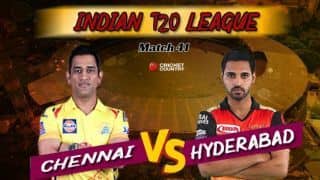 Today's Best Pick 11 for Dream11, My Team11 and Dotball - Here are the best pick for today's match between CSK and SRH at 8pm