Deccan Chargers wasted a good start to the innings thanks to an excellent spell of bowling from Siddharth Trivedi who combined well with Shane Warne to restrict them to 137 for 8 in their 20 overs. There were starts from four of the Chargers batsmen but not one managed to cross 28. 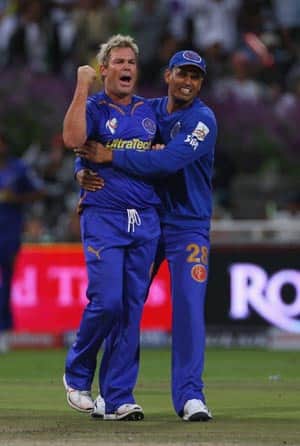 Deccan Chargers wasted a good start to the innings thanks to an excellent spell of bowling from Siddharth Trivedi who combined well with Shane Warne to restrict them to 137 for 8 in their 20 overs. There were starts from four of the Chargers batsmen but not one managed to cross 28.

On a track that had a semblance of grass on it, Rajasthan Royals won the toss and decided to field first. The start had a show of over-eagerness from the youngster Ashok Menaria, when he tried to run Ishank Jaggi out off the very first ball but missed the stumps by a long distance and the ball went to the fence for five overthrows.

Jaggi also started off well with a couple of boundaries off the bowling of Amit Singh at the other end. Even when the bowling was changed in the third over, Jaggi had no qualms in taking Johan Botha on and slamming the ball to the fence. A good second over from Oram, which was the fourth innings saw him concede only three as the Deccan Chargers had reached 30 without loss at the end of the fourth.

It was Amit Singh who got Rajasthan Royals the first breakthrough when he deceived the aggressive-looking Shikhar Dhawan for 24. Dhawan had earlier hit a four and a six off the same over and looked to repeat the dose but the ball never arrived.

One wicket brought another one, as one of the long-standing servants of the Rajasthan Royals side, Siddharth Trivedi had captain Kumar Sangakkara poking at an outgoing delivery to the wicket-keeper. Sangakkara had failed to opening account and the Chargers ended the Powerplay overs at 44 for 2.

As soon as the six overs had elapsed, Warne brought himself on but the action continued to occur at the other end. Trivedi had Bharath Chipli inside-edging one on to the stumps as the side began to lose the momentum.

JP Duminy did hit a six off Warne, but along with Jaggi (25), became two of the victims for the Australian maestro. With Botha throttling the Chargers at the other end with some excellent bowling outside the Powerplay the run-rate fell below six for the first time, in the 13th over. The Chargers had lost half their side by this time and had only 77 on the board. Warne bowled his four overs at a go, ending with two for 21 in his quota.

All-rounder Daniel Christian, bought at the auction for a whopping $900,000 seemed to then justify his price by turning things around for the Chargers. First, in partnership with DB Ravi Teja, he took advantage of the first over that Menaria bowled in the innings, scalping nine runs, before smashing a four and a six off Botha.

Post the strategic break, Christian walloped another six in the 17th over that was bowled by Amit Singh but Trivedi’s excellent spell of bowling continued with his third wicket of the South Australian all-rounder. Trivedi’s four overs cost him only 15 to go with those three wickets.

Unfortunately for the Royals, Oram had to go off the field to treat an injury and that meant that Stuart Binny had to bowl the 19th over. Ravi Teja took toll off those six balls hitting a four and a six in the over.

Amit Singh picked up a couple of wickets in the last over and ended with a three-wicket haul as well as Deccan were left way short of the score they would have liked to achieve. 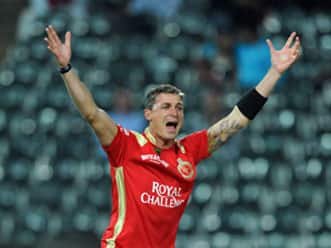