Deccan Chargers managed only 64 runs in their last 10 overs to waste a good start away. They ended their 20 overs on 136 for eight to give the Pune Warriors a good chance to chase down their fourth win in the competition. 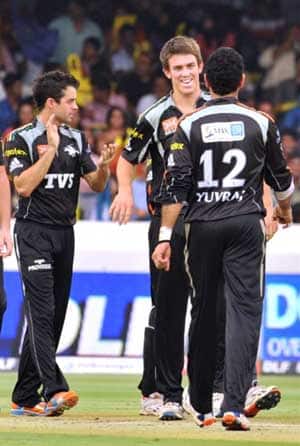 Deccan Chargers managed only 64 runs in their last 10 overs to waste a good start away. They ended their 20 overs on 136 for eight to give the Pune Warriors a good chance to chase down their fourth win in the competition.

The start to the Deccan Chargers innings was similar to what they had got in the Delhi Daredevils game. The opening pair of Shikhar Dhawan and DB Ravi Teja added 51 for the first wicket in less than seven overs.

Dhawan looked good for the time he was there, hitting a couple of sixes off successive overs. Ravi Teja began well too, with a couple of hits to the fence in the second over and went on to get 30.

The end of the Powerplay overs not only brought the scoring down but earned the Warriors a couple of quick wickets.

Yuvraj Singh hasn t bowled too much in the tournament, but in the very first over that he bowled today, Dhawan s attempt to collar him cost him his wicket. Off the first ball he faced, a reverse-sweep got him no runs and off the second, a charge down the wicket had the batsman getting caught at mid-off.

Yuvraj would later, go on to pick up the wicket of Dan Christian to end with attractive figures of two for 17 from his four overs.

Ravi Teja followed in the next over when he inside-edged a swipe off Mitchell Marsh onto his stumps.

Kumar Sangakkara failed to follow up his sublime innings from the previous game and when he was dismissed for 12, lbw while attempting a sweep, the Chargers were in trouble at 76 for three in 11 overs. The run-rate had dropped from almost eight to less than seven runs per over.

And when Yuvraj got Christian lbw, the Chargers were 98 for four and staring at trouble.

JP Duminy had been Chargers saviour in the Delhi game. Going into the match with form not on his side, he had cracked a half-century in quick time to propel his side to near-invincible score.

Duminy top-scored for his side again, but this time it was a much more measured innings. One of the reasons for that was the consistent loss of wickets at the other end. However, most vitally, one got the sense that the ball wasn t coming on to the bat as easily as one thought it would.

Unfortunately for the side, with two overs remaining, Mitchell Marsh had the better of Duminy and the side fell away. Marsh picked up two more wickets in that same over, the 19th of the innings, and the Chargers ended at 136 for eight.

In the middle overs, it was the Pune spinners who tightened the noose around the Chargers by conceding only 41 in their eight overs.

Both sides made one change to their line-up. Ishan Malhotra, who had been sent packing in the only over he bowled in previous game by the Delhi Daredevils captain Virender Sehwag, was replaced by Pragyan Ojha. Sourav Ganguly made his much-awaited debut for the Pune Warriors in place of Abhishek Jhunjhunwala.