Ngidi took 25 wickets in 10 limited-overs matches for the Proteas in the summer, including career-best figures of 6/58 in his last encounter against Australia.

“Having Langeveldt back has been really good for me. He has been very supportive and encourages the way I think. As a bowler, I feel really comfortable with executing my plans and I never fear that the bowling coach is not going to agree with my plan, Ngidi said in a statement.

“He understands me and he’s been there before. He’s been in situations where you have the ball and you have to deviate from the game plan. He’s got a lot of knowledge and he himself was a very skillful bowler. He’s helped me a lot,” he added.

It has been a challenging home summer for South Africa as they lost the Test series 3-1 to England before the 50-over world champions drew the ODI leg of the tour 1-1, and won their three-match T20I series 2-1.

The team also suffered a 2-1 defeat in the T20 series against Australia but bounced back to beat the same opponents 3-0 in the ODIs.

Langeveldt joined Proteas’ side in December last year. Prior to this, he was working with the Bangladesh cricket team under Russell Domingo. 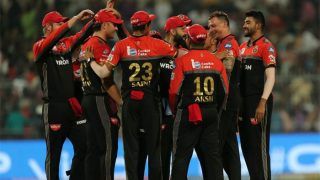