In years gone by you probably wouldn t have been able to see Athapaththu s innings unless you d been at the ground, but with this tournament s high profile we are all able to see how good she was.

When I was young and getting involved in cricket, my heroes tended to be from the men s teams because you just didn t see women s matches on the TV. It s great now that all these ICC Women s World Cup 2017 games are televised and the social media coverage has been brilliant.

It s been lovely to see that the talk hasn t been all about England and everyone has been loving watching Smriti Mandhana score runs for India, Chamari Athapaththu s amazing hundred and celebrating everybody s achievements. There are so many role models for young girls to take to their hearts.

I ve been so impressed by the crowds at this World Cup. I wondered before the tournament started how well attended the non-England games would be and having been down at Taunton for the Australia versus West Indies match and then watched the West Indies versus India game on the TV, I was so pleased to see the big crowds there. There were lots of school children at the grounds and there is a real and growing excitement about watching the women s game.

I was at Leicester on Tuesday for England s game against Pakistan and there was nearly a full house, loads of youngsters and a real good atmosphere. That s what we want – all the teams playing in front of good crowds and for them to appreciate the standard of cricket on show. I ve been out into the crowds and talked to a lot of the kids and you can see the excitement in their faces. It s quite a thing for a young kid to go home to their parents and say they ve been to a World Cup game.

You can t put a price on having a World Cup in your own country. It s pretty special and you really sense that exuberant mood when you are at the grounds. One of the big objectives of this World Cup was to leave a legacy and you do feel we are creating something really special.

The players have put in some unbelievable performances so far. Athapaththu scored one of the best hundreds you ll ever see anywhere in cricket and everyone suddenly sat up and realised how brilliant this World Cup is. For Athapaththu as an individual, that knock could change her life with the Women s Big Bash League and the Kia Super League contracts up for grabs and other opportunities. It s great to see players performing on the biggest stage and appreciate the rewards they will get for their hard work.

In women s cricket, we all knew that she is a quality player, but for her to score 178 not out wasn t just sensational, but she did it against Australia and got 68% of the side s runs in the process it was one of the best innings you ll see. The ball was going so far over the boundary rope and that s one of the things that has stood out for me in this tournament how far the girls are hitting their shots.

It seems like we ve seen more hundreds already in this World Cup than we have in whole tournaments in the past. Mandhana s hundred for India has probably been a bit overshadowed by Athapaththu s. And then Meg Lanning scoring a hundred as Australia beat Sri Lanka to ensure Athapaththu s heroics were in vain and hardly anyone is talking about that. And everyone seems to have already forgotten about Nat Sciver and Heather Kinght s wonderful hundreds for England. The performances are coming so thick and fast, the standard is really high and we re moving on so quickly from one great achievement to the next. I m so looking forward to every game to come.

Sri Lanka worried Australia the other day, has put itself into positions to win games and has definitely done a lot better than I thought. England won t be taking it lightly on Sunday.

We ve got four games on Sunday and there are two massive rivalries in amongst them. My game of the day would probably be Australia versus New Zealand as they ve always had brilliant World Cup contests and I m absolutely certain that Sunday will be no different. And then we ve got India vs Pakistan after last year s World T20 upset when Pakistan took the bragging rights.

India has been the team of the tournament for me so far and it ll be looking to continue its good run of form at Derby. They ll be brilliant games to play in for those players. I don t think people from outside of India and Pakistan quite understand the rivalry between those countries until we see it up close and witness how important that game is to the players and how highly the countries regard that fixture. I m sure everyone will be tuned in to the TV coverage and it will be great to see what viewing figures they get because it will be one of the biggest games of the tournament.

I m absolutely loving this World Cup and the high quality cricket we ve seen. Now they ve all played a couple of games and it s good to see how the table is shaping up. There are some huge matches coming up over the next 10 days. You want to see the best players in the world put into pressure games and situations and to see who comes out on top. That s what the viewers want to see and there is plenty of opportunity to do just that over the next couple of weeks as we see who manages to reach the semi-finals.

(This article was first published on icc-cricket.com) 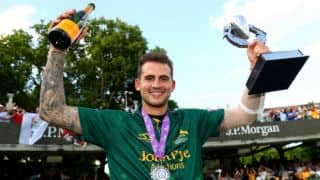