Hello and Welcome to CricketCountry’s live coverage of  the eleventh match of ongoing Celebrity Cricket League (CCL) 2016 which is being played between Chennai Rhinos and Kerala Strikers at Uppal Stadium in Hyderabad. This is the the third and final league match of both the teams for this season. Chennai Rhinos are currently last in Group B points table behind Telugu Warriors, Karnataka Bulldozers and Kerala Strikers; who are at first, second and third position respectively. The clash is expected to be interesting considering some big names of Chennai and Kerala film industry will battle it out today. The semi finals are scheduled for February 13, a day before the all-important final match.

Live cricket score: Kerala Strikers 107/3 (Target: 157) | Overs 15 | Batsmen: Benny 34(17), Gopan 14(15) | Benny is keeping the hopes alive for Kerala Strikers. He bowled wonderfully earlier on and he is now hitting the ball hard too. Gopan is giving him company at the other end. Chennai still look good.

Live cricket score: Kerala Strikers 22/1 (Target: 157) | Overs 5 | Batsmen: Rajeev 9(15), Arjun 0(2) | Kerala Strikers have lost an early wicket, and they have not managed to put too many runs on the board. Things do not look good for them at the moment. Chennai Rhinos have started well with the ball in this innings.

Live cricket score: Chennai Rhinos 156/8 | Overs 20 | Batsmen: Ramana 2(1), Ashok 3(5) | This has been a disappointing end for the Chennai Rhinos. For a while they looked set for a massive total while Vishnu and Prithvi were batting, but frequent wickets have meant that they finish at just 156.

Live cricket score: Chennai Rhinos 122/3 | Overs 15 | Batsmen: Vishnu 46(27), Kalaiyarasan 0(1) | Prithvi has been dismissed, followed by Shaan first ball, but Vishnu is going strong at the other end. Chennai Rhinos lose two wickets in two balls in the 15th over. Vishnu will hold the key now.

Live cricket score: Chennai Rhinos 81/1 | Overs 10 | Batsmen: Prithvi 31(30), Vishnu 20(12) | Chennai Rhinos have got off to a great start so far. Prithvi and Vikranth had got them off to a decent start to begin with, but Vishnu and Prithvi are taking it further now. Kerala Strikers in some trouble at the moment.

Live cricket score: Chennai Rhinos 28/0 | Overs 4 | Batsmen: Prithvi 13(13), Vikranth 13(11) | Good start so far from Chennai Rhinos. Kerala Strikers are bowling well also. So far this is an average start to the match, which is being played at Hyderabad. Prithvi and Vikranth are the two openers for Chennai.

For Chennai to reach the semis, it is imperative that they win this encounter and with a decent if not a good margin. Even then their place in the semis is not certain. If the clash between Telugu Warriors and Karnataka Bulldozers (scheduled for Sunday evening) happens to be a close affair in which Telugu wins, then Chennai in high probability will not make it to the semi-finals. For Kerala, they will be hoping to win the match and thus increase their probability of entering the semis. This is the sixth season of the league. The inaugural season was 2011, from then onwards it has happened every year without a break. 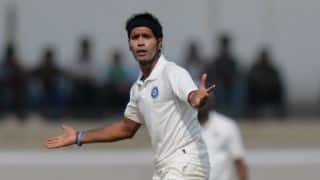 Ashok Dinda: Surprised on being snubbed in first round of IPL Auction 2016 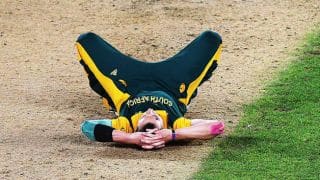