Albie Morkel's heroic 73 not out almost took DD to a victory.

Chennai Super Kings (CSK) began their Indian Premier League (IPL) 2015 campaign with a one-run victory against the Delhi Daredevils (DD) at the MA Chidambaram Stadium, Chennai. This is a positive start for the MS Dhoni-led side as they successfully defended 150 on a slow surface. DD had won the toss and chose to bowl, doing a good job to restrict the hosts. However, they looked inept and unplanned during their run-chase, but there was some drama in the end as they came very close. Albie Morkel’s fighting 73 not out nearly took DD to victory with wickets falling at the other end.

DD’s batting order left a lot to be desired. Yuvraj Singh and JP Duminy were kept for the slog overs, a move that backfired as they failed under pressure. Instead, Albie Morkel, Shreyas Iyer and Kedar Jadhav batted ahead of them. Mayank Agarwal and CM Gautam opened, but fell to Ashish Nehra early in the innings. Morkel wasn’t at his hitting best and had to stay in the middle and anchor the innings. The only partnership of any note he had was with Jadhav of 48 runs for the fourth wicket.  Live Updates: Chennai Super Kings (CSK) vs Delhi Daredevils (DD), IPL 2015 Match 2

DD did not get the move on in the middle and once Yuvraj and Duminy entered, it was time to go for the big shots. Both did not last long and left the task to Morkel, who cut a lone figure in the middle. He got to his fifty off 43 balls, a hard-fought innings as DD were facing the pressure from CSK. In the end, CSK strangled DD and did not let Morkel smash his way out of jail. In the end, 14 were required off the last three balls. Morkel smashed a six and then took two. Off the last ball, Morkel only managed a four.  Chennai Super Kings (CSK) in IPL 2015: Kings of consistency look to rule again

CSK were put in to bat and had started well with Dwayne Smith putting on a dominant show. Faf du Plessis also scored 32 to keep CSK going. However, DD did well to get back into the contest. Nathan Coulter-Nile had bowled a good spell upfront and did some good work in the end, finishing with two for 28. MS Dhoni’s two sixes in the last over spoiled Coulter-Nile’s figures a tough. But, such was the pressure that CSK were in knots in the middle.

Imran Tahir and Amit Mishra had bowled well. In their eight overs in tandem, they conceded only 48 runs for two wickets. Had they not bowled well, CSK may have scored a lot more. Even Dhoni found it tough to work the ball away, until the final over. CSK ultimately finished with 150 for seven, that seemed decent on a slow wicket.

Man of the match: Ashish Nehra 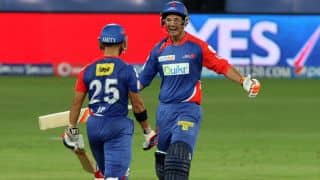 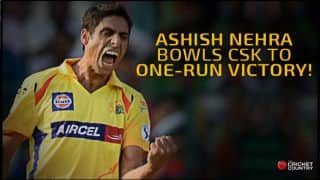