Chennai Super Kings (CSK) face off against Royal Challengers Bangalore (RCB) in Qualifier 2 of Indian Premier League (IPL) 2015 at Ranchi on Friday. CSK  were beaten by Mumbai Indians (MI) by 25 runs in Qualifier 1, and will still feel the effects of that drubbing. On the other hand, RCB thrashed Rajasthan Royals (RR) by 71 runs to win the Eliminator comprehensively, so their confidence will be sky high. Live Scorecard: Chennai Super Kings vs Royal Challengers Bangalore

In both Qualifier 1 and the Eliminator, the side batting first has won. Whoever wins the toss in the second qualifier could well follow suit and choose to bat first. CSK have lost a bit of their sheen with the departure of Brendon McCullum. The thought of him going ballistic would have given most bowlers sleepless nights. However, his replacement Michael Hussey has looked in decent nick as well. Live Updates: Chennai Super Kings vs Royal Challengers Bangalore

The match is too close to call. CSK have far more experience in these situations, but that did not stop Kings XI Punjab (KXIP) from edging past them in the second Qualifier of IPL 2014. RCB could take inspiration from that and look to reach the final once again. RCB have never won IPL; this could be their chance to rectify that. Indian Premier League (IPL) 2015: Complete coverage 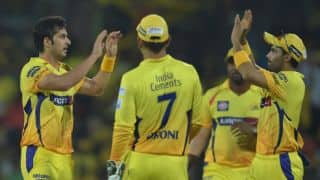