Indian batsman Virat Kohli, who along with centurion Cheteshwar Pujara stitched a crucial fourth-wicket partnership on day one, said both had a sense of responsibility as they replaced two veterans Rahul Dravid and VVS Laxman in the middle order. 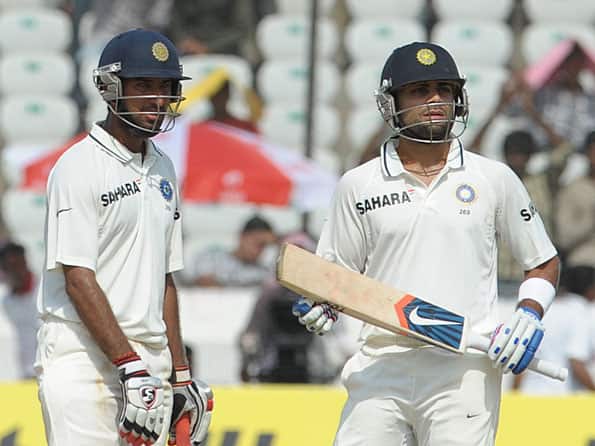 Virat Kohli (R) and Cheteshwar Pujara shared an partnership of 125 runs for the fourth wicket on the first day of the first Test against New Zealand. AFP

Indian batsman Virat Kohli, who along with centurion Cheteshwar Pujara stitched a crucial fourth-wicket partnership on day one, said both had a sense of responsibility as they replaced two veterans Rahul Dravid and VVS Laxman in the middle order.

He said,” We weren t really thinking about the pressure. But we did have in mind that we will suddenly be without two of the greatest batsmen that India has ever had.

“We knew we had to take up the responsibility, and I think we did a pretty decent job on the first day. We like taking up responsibility.”

Kohli and Pujara shared an invaluable partnership of 125 – the highest fourth wicket partnership on the first day of the first Test against New Zealand.

The above stand, involving Kohli, is the highest in Tests. Before the Hyderabad Test, the only century stand shared by him in Tests was 114 with Wriddhiman Saha for the sixth wicket against Australia in January 2012.

Speaking about their partnership, Kohli said,” Being looked at as the future of India s Test middle order, it was really important for the two of us build that partnership at that stage.

“We were able to do that and we feel really good about it. It was especially really commendable the way Pujara batted, making a comeback after so long. It s always special for anyone to score his first Test century, as it was for him.

“Hopefully, as we learn more about Test cricket, we can come up with many such partnerships for India and fill the shoes of the legends who have left us with so many examples and lessons that we ve learnt from them.”

Kohli feels the Indian team will miss the calmness of Dravid and Laxman the most, in the dressing room.

He said, “I think their mere personalities, the calmness and sense of assuredness they brought into the dressing room will be missed.

“The amount of professionalism and passion for the game that they had will be missed. Both of them had similar personalities and they were great friends as well. It s up to us to carry forward their legacy.”

With Kohli being in prime form, Pujara batting ahead of the batsman was a surprise move for many. But Kohli justified the team’s decision to send Pujara ahead of him.

He said, “It was just the way the team planned before the game. Since I have been batting in the middle-order in the shorter formats, I have a fair idea as to how to go about things down the order.

“But for Cheteshwar, making his comeback, it was really important for him to get a good time out in the middle. When you re batting in the lower-middle order, you don t know when you ll get in there.

“Someone who s making a comeback just wants to get out there in the middle and be part of the action without having to wait. Pujara showed great temperament when he first played for India but then he wasn t a part of the team for a long time.

“Hence, it was very important for his confidence spend more time in the middle. I think that worked really well for Pujara and we re all very happy for him. The more number of players perform, the stronger the team gets.”

Kohli added that he was not surprised by the Saurashtra batsman s aggressive batting during the day.

He was quoted by BCCI s official website as saying,” I wasn t surprised. Pujara is a sort of batsman who can adapt to different conditions and formats. I remember, in 2011 we were playing an IPL game here in Hyderabad. And he was batting with me. He hit Dale Steyn for three beautiful fours.

“At that time, I saw how aggressive he can be. He can hit the ball pretty cleanly and in a Test match, when you have the fielders inside the circle, there are more chances of clearing the rope.”

Kohli said he was gutted to be dismissed after scoring a half-century.

“I am very disappointed with the way I got out. After scoring 60-odd runs, it s a crime for a batsman to get out like that. You work so hard to get there and one shot ends your innings, “he said. “My plan was to stay there till the end and had I done that, I d be at an overnight score of close to 100. Things don t always work out well, but I m happy I got a good start in the series with a half-century.”

Kohli accepted that it was due to lapse in concentration that brought his downfall.

He said, “Yes, you can say that. The wicket was a bit slow and the ball wasn t travelling off it. I still went for that shot and it was probably not good shot selection from my end.

“I made a mistake and I ll ensure that doesn t happen again. Hopefully, the next time I get a chance to bat, I ll get a hundred.”