Cheteshwar Pujara took a giant stride towards Test breakthrough as he led India 'A' to a thrilling two-wicket win with an unbeaten 96-run knock on the fourth and final day of the first unofficial cricket Test against the West Indies 'A'. 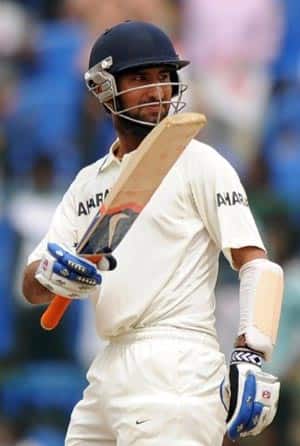 Cheteshwar Pujara took a giant stride towards Test breakthrough as he led India ‘A’ to a thrilling two-wicket win with an unbeaten 96-run knock on the fourth and final day of the first unofficial cricket Test against the West Indies ‘A’.

Chasing a modest 186, India were in doldrums at 5 for 68 before Pujara played the captain’s role exceptionally well to guide the visitors to a nerve-wrecking win.

Pujara added 73 runs with number 10 batsman Shami Ahmed (27) to steer the Indians home after a spectacular collapse had severely jeopardised the team’s chances.

Pujara, who has struck a 50 in the first innings, was once again patience personified as he held one end even as wickets tumbled at regular interval around him.

The 24-year-old right-hander faced 222 deliveries and struck 10 fours in a calculated innings that should impress the selectors when the senior squad is picked.

For the home team, lanky pacer Jason Holder, playing at his home ground, registered his third five-wicket haul in his 15th first-class match — a performance that reduced India A to 115 for 8 at one stage.

On a rain-interrupted day, a draw seemed likely when the two teams went off the field in the final hour with India ‘A’ needing 20 runs but the weather cleared and Pujara ensured that it was an opportunity grabbed as he took his side to a nail-biting triumph.

When rain struck the match for the first time, at lunch break, West Indies ‘A’ pacers had added three more wickets to the overnight 22/3, giving away just 55 runs in the process.

Most of India’s batting was a shambolic effort with six of their willow-wielders falling to single-digit scores. In fact, Ahmed’s 27 was the next best score on the sheet after Pujara’s momentous 96.

Rohit Sharma, who had rescued the team with a 94 in the first innings, battled hard for a 60-ball 23, but could not build on the patient effort — dismissed by pacer Derlorn Johnson.

Rain during the lunch caused a 45-minute delay in resumption and it only strengthened Pujara’s resolve, who was at 26 before the break.

With wickets falling around him, Pujara shifted gears in the later half of the chase and became more aggressive.

India ‘A’ were 115 when Holder dismissed number nine Bhuvneshwar Kumar (3), giving the hosts a good chance of sealing a win.

But Pujara and Ahmed added more than 50 before heavens opened up again to cause a 15-minute interruption.

India ‘A’ needed 20 at that stage and after resumption, Pujara eased the pressure with a four before finishing it off with another boundary in the end.

The second and third match of series will be played at Kingstown and Gros Islet respectively.