According to Cheteshwar Pujara, the most beneficial aspect will be playing county cricket at Test venues of India s tour, which will give an idea about pitches and conditions.

Come April when the country’s top cricketers crisscross the nation for IPL, Test specialist Cheteshwar Pujara will be starting his homework for India s English Test .

Pujara will be turning out for English county heavyweights Yorkshire in Division 1 with an eye on five Test series against England in August.

I am looking forward to the county season as we will be playing Test matches in August. I was with Yorkshire in 2015 when we won the County Championship. It’s a fantastic team with good bunch of professionals, which helps me become a better cricketer, Pujara told PTI during an exclusive interview at the Kotla today.

According to Pujara, the most beneficial aspect will be playing county cricket at Test venues of India s tour, which will give an idea about pitches and conditions.

Look, playing at Headingley in early English summer with temperatures around 4 or 6 degrees will test any batsmen’s technique and temperament. Even scoring a 50 is tough. By the time, India tour starts, it will be bit more pleasant, said Pujara.

Now playing Division 1 has its advantages. I will be playing against Middlesex (Lord’s), Warwickshire (Birmingham) and Surrey (Oval) in away games, where India will play Test matches. So I will get a fair idea about the pitches and conditions, Pujara explained further.

For Pujara, there isn t much change technique wise from South Africa to England.

The basics will remain the same but the primary criteria of doing well is respecting conditions. Technically, it s more or less same. I use lighter bats when playing overseas. Also the kind of fight we put in South Africa will augur well for us in England. May be we could have batted a bit better but we were in with a chance in all games, said Pujara.

The 30-year-old cricketer, who has played 57 matches in the longest format, agreed that none of the top Test teams are travelling well.

England s performance in Ashes will tell you that all top teams are struggling a fair bit in overseas conditions.

As the discussion veered towards playing spinners, Pujara agreed that the team will be more well equipped to play Moeen Ali, who had tormented them with 19 wickets.

“Obviously we will be better prepared but that doesn’t mean we can take Moeen or any other English bowler lightly. The best part is we have a fair idea about their core bowling unit,” said Pujara.

Talking about South African batsmen not picking Yuzvendra Chahal or Kuldeep Yadav during ODI series, Pujara said: It will be difficult if you can t pick up the variation from wrists. If you can t differentiate Chahal s googly from his flippers, then there s trouble. You have to have an understanding which way the ball would turn. 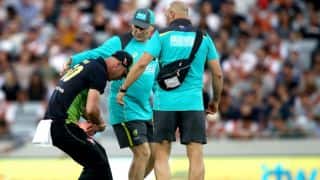