Cheteshwar Pujara relished batting at number three as he struck his maiden Test hundred on Thursday but said it will not be appropriate to suggest that he can replace a legend such as Rahul Dravid. 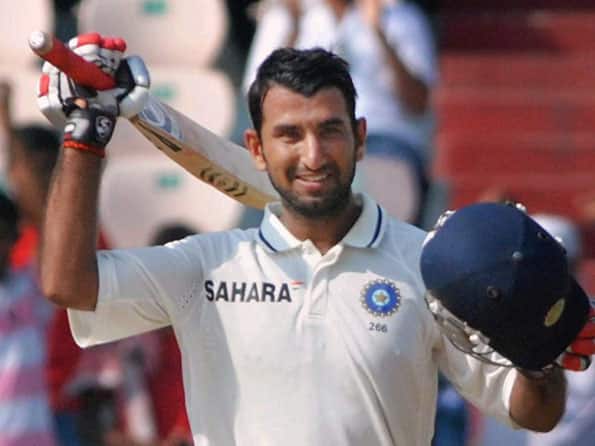 Cheteshwar Pujara, playing his fourth Test, said he had immense experience to play at this position so scoring runs was not difficult. PTI

Cheteshwar Pujara relished batting at number three as he struck his maiden Test hundred on Thursday but said it will not be appropriate to suggest that he can replace a legend such as Rahul Dravid.

Dravid batted superbly at the crucial position of number three for India before retiring early this year.

“I don’t think I can replace Rahul Dravid because he is such a legend. He has more than 10,000 runs in both the formats. It’s impossible to replace him,” Pujara who slammed an unbeaten 119 against New Zealand, said in the post-match press conference here today.

A modest Pujara, playing his fourth Test, said he had immense experience to play at this position so scoring runs was not difficult.

“I knew I could bat at No 3. So my preparation was up to the mark. I played at No 3 for Saurashtra. At times I opened for my employers Indian Oil Corporation. So I have enough experience batting up the order. I did not have to worry about anything. At domestic level, I batted up the order at No 3 and 4 so it made a difference,” he said.

Pujara said it was very satisfying to get to his maiden century, which he had missed in his debut match when he got out after scoring 72 against Australia in 2010.

“Obviously I am really happy, it was a dream to start off like this. I wanted to score a hundred in my debut game. But somehow I missed it so I am really satisfied that I got my maiden hundred now.”

He dedicated the achievement to his parents and was looking at converting it into a double century tomorrow.

“I’m very thankful to him. I would like to dedicate this to my father. He has been working with me since I was a child.

I would like to dedicate this to my father and my mother.

Individually if I can score a double hundred that would be great, but the initial target would be to score a 400.”

Pujara said he faced a lot of issues recently but that only made him mentally strong.

“I had injury twice. I was out of the game for almost a year. It’s been a frustrating time for me and my family.

Somewhere in my heart I knew that I would make a comeback in the game I love the most.

“Even my father had some tough time. He had a bypass surgery. And, he’s still coaching me. So, once you go through a difficult period, you become mentally tough. The hunger for the game becomes a little more.”

He has been branded as a Test specialist but Pujara begged to differ.

“My game has been quite attacking. It’s just that people say that I’m more suitable to Test format but I play many shots. Even in the domestic format, I have hit many sixes.

“My game has been quite aggressive in last three-four years. Even my strike rate is more than 60 or 70 if you see the period of three to four years,” he argued.

Pujara said he felt pressure when he as batting in the 90s as the wicket was slow.

“At times you come under pressure but I think things went really well for me. The wicket was really slow after lunch.

The outfield was really slow. We had to wait for loose balls.

“I was happy with the way I paced it. At times it becomes frustrating you have to have some patience. That’s what the Test cricket all about. I was mentally tough to handle those kind of situations.”

In the final session, New Zealand were one seamer short after Doug Bracewell pulled out following a muscle cramp and Pujara said it helped the Indians.

“They were quite tired after lunch. We knew that their one fast bowler was down with the injury. Initial plan was to build up the partnership and then capitalise from then on,” Pujara said about his 125-run fifth wicket partnership with Virat Kohli.

Pujara also congratulated the Indian colts for making the U-19 World Cup final and hoped that they return home winning the trophy beating the Australians in the final. (PTI)