Pujara was eventually dismissed for 112 of 206 balls, a knock comprising of 14 fours. He, however, will have to wait longer to complete his 12,000 First-Class.

Star Indian batsman Cheteshwar Pujara completed his 39th First-class hundred on his home debut for Nottinghamshire in the County Championship Division Two on Friday. The 29-year-old batsman, playing only the second game of his brief county stint, reached the three-figure mark in 174 balls with 13 fours on day one of the match against Gloucestershire. He was eventually dismissed for 112 of 206 balls, a knock comprising of 14 fours. Pujara, however, will have to wait a little longer to complete his 12,000 First-Class runs after being dismissed on 112 by Craig Miles in the 82nd over of the Nottinghamshire innings.

Pujara batted alongside England batsman Michael Lumb with the two sharing a 185-run stand for the fourth wicket. Nottinghamshire were 307 for four after Pujara’s dismissal. The team eventually ended the day on 357 for 5 from 96 overs.

@cheteshwar1 has got his account up & running for Notts with this fine innings pic.twitter.com/auZI9LoYfl

Pujara had made just 2 runs against Glamorgan in what was his first match of the season. The right-handed batsman, who is considered as India s Test specialist, has played 48 Tests and averages 51.32 with 11 hundreds and 15 half centuries. He will be next seen in action at international level when India tour Sri Lanka in July this year. 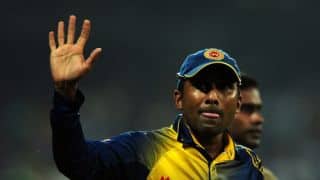