Mortaza and Taskin kept things very tight and tested the Indian batsmen in the second One-Day International (ODI) between India and Bangladesh at Dhaka. Suresh Raina led a fightback for India, but Taskin continued his very impressive debut by accounting for a struggling Cheteshwar Pujara, out LBW after a very scratchy 34-ball 11.

Taskin Ahmed struck twice on debut. After dismissing Robin Uthappa in the first over after the break, he had new man Ambati Rayudu out LBW as well. At the other end, Cheteshwar Pujara was finding it very tough to score runs as he was languishing on seven from 27 balls and India were crawling at 29 for three after 10 overs.

Taskin continued, bowling the eighth over. Uthappa managed to get four off the first delivery, before taking a couple off the next one. However, Taskin soon had reason to celebrate, as Uthappa top edged a shot to the man at mid-off to give Taskin his maiden ODI wicket. From the other end, Mortaza continued his good spell, hardly giving anything away.

Taskin resumed after the break and completed his over, going for four runs off it. Mortaza continued, and bowled another tight over, going for just two runs. His bowling figures at the time was 4-1-6-1 as he kept the pressure flowing for Bangladesh.

Earlier, rain interrupted play in the second ODI between India and Bangladesh at Dhaka. Taskin Ahmed could bowl just two deliveries on his ODI debut before the heavens opened and the covers came on. In those two balls, he bounced Cheteshwar Pujara twice, at good pace.

Mashrafe Mortaza continued for Bangladesh. Again, he kept things tight as Uthappa found it very difficult to score off him. The conditions made it very tough to score freely. There was variable bounce and lots of movement off the pitch. Mortaza bowled a maiden over.

Al-Amin Hossain bowled the fourth over after bowling a maiden first up. Uthappa hit him for a boundary down fine leg before ducking a short ball and getting a single off the edge of the bat. Just five runs were scored off that over, as the Indians were finding it very difficult to score at will.

Earlier, Ajinkya Rahane was dismissed for a first ball duck for India against Bangladesh in the second ODI at Dhaka. Mashrafe Mortaza was the bowler. Cheteshwar Pujara came in at the No 3 position very early in the day. India were off to a bad start with only nine off the first three overs, for the loss of one wicket. 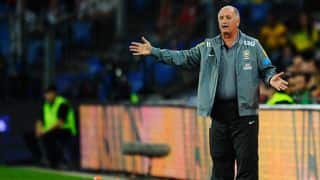 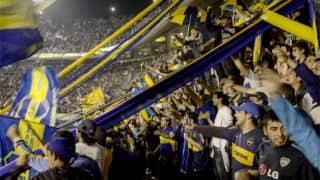