Cheteshwar Pujara knows very well that his primary goal is to get back his place in the playing XI of the Indian Test side.

Chennai: Cheteshwar Pujara knows very well that his primary goal is to get back his place in the playing XI of the Indian Test side and for that he is now gearing upto open the innings when India A take on Australia A in the second unofficial ‘Test’. Pujara in fact has opened for senior India against Australia during the 2013 home series but now with KL Rahul being rested, the Saurashtra right-hander is desperate to show the national selectors that he is ready to bat at any position. “KL Rahul is not here and has been rested. I will be opening in place of Rahul,” Pujara told reporters. Pujara knows that Test captain will also be keenly watching India A captain’s performance and he feels that Virat Kohli’s presence will help all the boys. READ: India A vs Australia A 2015, 2nd unofficial Test Preview

“Virat wanted to have practice before Sri Lanka tour and that’s why he is here. I was named the skipper before the series and I’m leading the team. Obviously, when I play for India A or India, it’s important to score runs. With Virat here, we have had a chat and discussed about the game how things are going on. It will be good for me as well as for all the youngsters. They can talk to Virat and learn from him. Virat can share his ideas and how he prepares. It is a good platform,” Pujara said. READ: Virat Kohli main attraction in India A vs Australia A 2nd unofficial Test

Having scored a half-century in the first ‘Test’, Pujara is looking to better his efforts. “Things are shaping up well. I have scored runs on difficult conditions. Even scoring a fifty was difficult on this track. My contribution was important in the second innings as well. Whe you play on difficult wickets, you don’t expect to score 200s. It’s about the team’s success. I would have loved to have a hundred under my belt.

“But I felt good while timing the ball. The things which I had worked on has been coming together well. The weather was tough. When you are batting, you sweat a lot. You have to run between the wickets. The way you want to concentrate doesn’t happen always. At times, conditions are challenging,” said Pujara.

Pujara also defended wicketkeeper Naman Ojha’s poor show behind the wicket terming it on the nature of the strip. “He is keeping well. The wicket was tough as few balls kept low while few bounced. Naman did a good job. First catch in the first innings was a good catch. I don’t believe in comparisons. Ojha and Saha are different in their batting and keeping styles. And ultimately, who comes into the side depends upon the selectors. I don’t really believe in comparisons.”

Apart from KL Rahul, Pujara said that Umesh Yadav and Amit Mishra have also rested for this game. Haryana off-spinner Jayant Yadav has come in to the squad. Pujara also said that Varun aaron has recovered from a bout of flu and is ready to take the field. “Aaron is fit and are ready to go for tomorrow’s game. Everyone is looking forward to it. Hopefully, we get a good game tomorrow.” 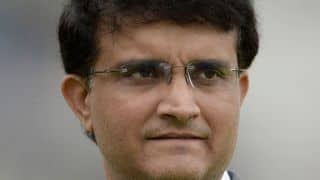