Cheteshwar Pujara is set to resume County Championship for Nottinghamshire, for the final four games of the 2017 season.

Cheteshwar Pujara is set to resume County Championship for Nottinghamshire, for the final four games of the 2017 season. Pujara is in rich form, slamming 2 centuries of the 3 Tests he played in Sri Lanka, and was one of the contenders for the Player of the Series. He slammed 309 runs at 77.25. He has been India’s best batter in Test cricket for almost a year now. Pujara will be available for the home as well as away fixtures against Northamptonshire, as well as the home match against Worcestershire and Sussex at Hove. Nottinghamshire is desperately looking forward to being promoted to Division One. ALSO READ: Cheteshwar Pujara: To play Tests, county cricket is the way to go

Playing county cricket is about being in that environment and batting on those wickets which seam and have a bit of bounce. It is all about getting the experience and nothing related to your technique. Once you reach a certain point (in your career), your technique is very much decided and all you need to do is fine-tune it. If you start playing county cricket, you start having an idea about how to perform in those conditions. I believe county cricket helps you grow as a cricketer. I feel if you want to play Test cricket and aim to do well in different venues, county cricket is the way to go, Pujara recently told Times of India in an interview.

The 29-year-old, who represented Yorkshire in 2015, has played 4 games for the Notts, scoring 223 runs at 44.6. He scored a hundred against Gloucestershire, which contributed in the team’s win.

The great thing is that he has already been in the squad this season and he is fitted in so well both on and off the field, said Head Coach Peter Moores, according to a report published in the county’s official website. He is a fantastic player, and since he has been away he has had a great time of it in the Test matches for India. So we are getting a guy who is coming back in form and for the team spirit, Pudji coming back in is a huge boost for everybody. We have got two really big home games against Northants and Worcester, because it is a chance for us to put pressure on two sides that are up there with us. Runs on the board at Trent Bridge is always a big influence and having a player of Test match quality in Puji is a real bonus. 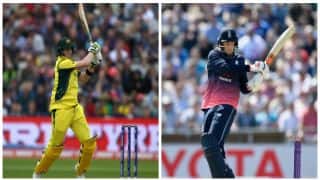