Australia batsman Travis Head feels India Test specialist Cheteshwar Pujara has set an example for others with his first-innings century, calling his gritty knock a "blueprint" on this pitch.

Australia batsman Travis Head feels India Test specialist Cheteshwar Pujara has set an example for others with his first-innings century, calling his gritty knock a “blueprint” on this pitch.

Taking a leaf out of Pujara’s book, Head scored a 167-ball 72 to steer Australia to 235 on the third day of first Test in Adelaide on Saturday.

Head helped score 44 runs in the rain-affected first session on Saturday as Australia just about managed to close the gap after Pujara had produced a superb 123 on the opening day to guide India to 250 in their first innings.

“The way Pujara played in the first innings was the blueprint for this wicket,” Head, who was born in Adelaide, told reporters.

“He had a really good leaving game, good forward defence, and as the ball got softer, he got more runs. Knowing how hard the wicket can be with the ball moving and the new ball, he played really well.”

Head was left disappointed after being caught behind for 72 off Mohammed Shami just when his partnership with Nathan Lyon was looking good. “It is disappointing to feel the momentum swing back. I wanted to continue on and felt if we could keep doing it for a period of time we could put them under pressure and keep them out there,” he said.

The pitch showed considerable grip and turn for Lyon in the Indian innings, and Head said that R Ashwin would have a lot of say in the fourth innings. “I just tried to stay busy against Ashwin. I learned a lot from Dubai first innings to second innings, I was really positive against the off spinner, watching the ball and not premeditating,” he said.

“It’s going to be the same in the next innings. There’s not much rough for the left-handers but this wicket always spins with the grass coverage.”

Head was confident that Australia will be able to chase down a 300-plus total, saying it becomes easier to bat on the last two days and such targets have been overhauled in Sheffield Shield cricket.

“This year bigger scores have been made and teams have batted out draws,” he said. “On days four and five, it gets easier to bat and 300-plus totals have been scaled easily (in domestic cricket). It’s more of a new ball wicket at the moment. It’s vital to win those moments when the new ball comes around again.” 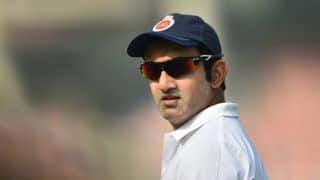