The Ranji Trophy 2016-17 season will comprise of 28 teams with Chhattisgarh being the new team to be introduced in the upcoming season, starting later in this year.  The Tour Programme and Fixtures Committee of the BCCI met in Mumbai to finalise the schedules for International and domestic cricket season of 2016-17. A lot of decisions and new venues have been selected to host different formats when India will be hosting bilateral series against New Zealand, England and Australia. On the other hand, domestic season will kick off in the month of September where in for the first time ever, Duleep Trophy will be played under lights and with a Pink Ball. During the entire season 918 matches will be organized that includes Ranji trophy, Vijay Hazare Trophy, Mushtaq Ali Trophy, Deodhar Trophy, Irani Cup, Women’s cricket and all other age group cricket. This translates into 1882 playing days from September 2016 to March 2017. READ MORE: India to play 3 Tests and 5 ODIs against New Zealand

According to www.bcci.tv, President of the BCCI, Mr. Anurag Thakur, said, “We are excited about the domestic season as we will be playing the Duleep trophy with the pink ball under lights and take this opportunity to welcome Chhattisgarh, who will play Ranji trophy for the first time. A combined team of Affiliate & Associate states will participate in the junior age group tournaments, which will provide the much needed opportunity to the emerging players from these areas. This further reaffirms our commitment to spread the game by providing the appropriate platforms to our next generation cricketer.”

Honorary Secretary of the BCCI Mr. Ajay Shirke said, “Some of the best teams of world cricket are coming to play in India this season and we are excited to announce the schedule well ahead of time. I have full faith in our team at BCCI to deliver International & domestic cricket simultaneously and engage the ardent fans, on all fronts.” 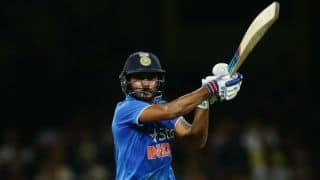