The Chairman of BCCI's pitches and grounds committee Daljit Singh said that the 22-yard strip at the Subrata Roy Sahara Stadium in Pune needs to be monitored after Maharashtra scored a whopping 738 for 5 in the first two days of the Ranji Trophy match against Uttar Pradesh. 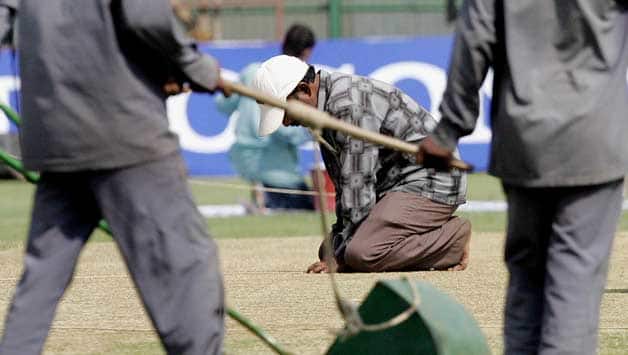 The Chairman of BCCI‘s pitches and grounds committee Daljit Singh said that the 22-yard strip at the Subrata Roy Sahara Stadium in Pune needs to be monitored after Maharashtra scored a whopping 738 for 5 in the first two days of the Ranji Trophy match against Uttar Pradesh.

“I am very satisfied how the wicket played during the first-round matches. Ghaziabad and Lahli are the two best wickets but I am a little bit worried about the Pune strip that has produced 700-plus scores. We need to have a proper look at the pitch. Also, the wicket at Surat,” Chief Curator Daljit Singh told PTI as he came for an inspection of the Feroz Shah Kotla pitch.

“The BCCI’s directives regarding the wicket that would be prepared for the Ranji Trophy is pretty clear. It should be a sporting wicket where a standard a first innings score should be in the region of 550 plus and it shouldn’t start turning square from the first day itself,” he said.

The former Bihar wicketkeeper-batsman also feels that the wicket at Eden Gardens has been quite impressive.

“I was happy to see the behaviour of the Eden Garden pitch. Now, we have a good team of 12 curators mostly who are pretty young and they have been assessing the pitch and ground conditions after every round. Normally, the inspection happens around a week or 10 days prior to the start of the proceedings,” he said.

Asked about the nature of the wickets that will be produced for the India-England series, Daljit presented a straight bat.

“We will produce good sporting wicket which will produce a quality Test match. In any case, each and every city has its own characteristic weather and soil. One cannot change that overnight but obviously with more and more curators gaining lot of knowledge and expertise, quality of wickets is surely going to improve,” he said.

The chief curator said that the best thing to happen is the certificate course for the curators started by the BCCI.

“BCCI had started the various courses for umpires, coaches, trainers for a long time now. But with this year, with the certified course for curators starting off, it will help the younger generation to have a proper concrete knowledge about how to make a good cricket pitch,” he said.

Although he was not willing to speak on record about the nature of the track during the India–England Test series but there were some hints that the home team will get some advantage if not a lot during the series that starts November 15.