New Zealand cricketer Chris Cairns on Friday pleaded not guilty to a charge of perjury and to perverting the course of justice in a match-fixing libel action. Cairns faces the allegations in light of being awarded £90,000 (118,000 euros, $136,000) in damages after he sued Lalit Modi, founder of the Indian Premier League (IPL) tournament, over an accusation of match-fixing made on Twitter in January 2010.

The 44-year-old appeared before the Old Bailey in London to enter a not guilty plea to a charge of perjury and to perverting the course of justice by inducing fellow former New Zealand player Lou Vincent to provide a false witness statement during a Skype internet call.

Alongside him in the dock was barrister Andrew Fitch-Holland, who denied one count of perverting the course of justice.

The pair stood side by side and spoke only to confirm their names and enter not guilty pleas to the charges as they were read out before the senior judge, Mr Justice Sweeney.

The judge adjourned the case for a pre-trial hearing on a date to be fixed in July ahead of a four-week trial fixed to take place at Southwark Crown Court on October 5.

In 2007 and 2008, Cairns captained the Chandigarh Lions in three competitions in the Indian Cricket League (ICL), which flourished briefly before the ascendancy of the IPL.

The allegation made by Modi related to the second and third of these competitions, between March and April 2008 and October and November that year. 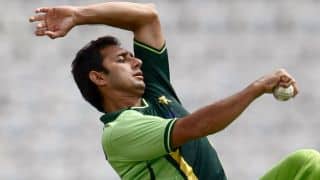