Royal Challengers Bangalore thumped the Pune Warriors India by 130 runs in what was a purely academic chase after posting 263 for five in the Indian Premier League (IPL). 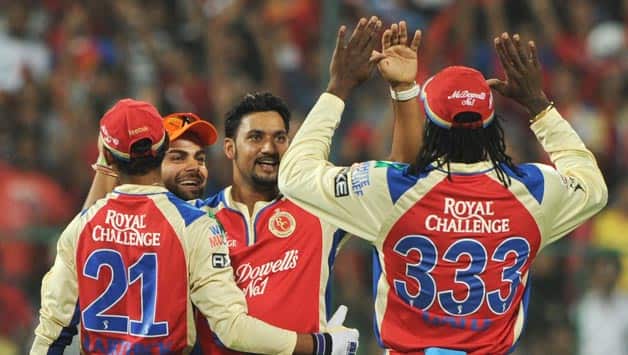 Royal Challengers Bangalore thumped the Pune Warriors India by 130 runs in what was a purely academic chase after posting 263 for five in the Indian Premier League (IPL).

Pune Warriors India had a snowflake’s chance in hell of chasing down 264 after Chris Gayle’s first-innings ballistics, but did well to mitigate the damage to their net-run rate by not getting bowled out, just about.

The visitors were off to a bad start after Robin Uthappa was caught at third-man in the first over itself, going for the big shots. Captain Aaron Finch, Pune’s best batsman in the tournament so far, also was helpless . Luke Wright and Yuvraj Singh went for their shots and perished in quick succession, and soon enough Pune were reduced to 42 for four in the sixth over.

Steven Smith then combined with Mitchell Marsh to restore some pride for the Warriors. The duo put on a 58-run partnership before Smith (41 off 31 balls) holed out to Tillakaratne Dilshan at mid-wicket off a top edge. Marsh (25 off 23 balls) followed suit after being bowled by Vinay Kumar to make it 119 for six in the 17th over.

Virat Kohli tossed the ball to Gayle for the last over, with the match done and dusted with. The Jamaican was back for Round 2 as he scalped Ali Murtaza and Ishwar Pandey, and broke into the Gangam jig.