Currently, RCB are 20 for the loss of a wicket in four overs with opener, Virat Kohli on six.

Royal Challengers Bangalore (RCB) explosive opener, Chris Gayle was dismissed for mere 13 by fast-bowler, Lasith Malinga, after being caught brilliantly by Lendl Simmons at short third man, against former champions, Mumbai Indians (MI) in Match 46 of the 2015 Indian Premier League (IPL) at the Wankhede Stadium in Mumbai on Sunday. Currently, RCB are 20 for the loss  of a wicket in four overs with opener, Virat Kohli on six and AB de Villiers coming in. Live Updates: Mumbai Indians vs Royal Challengers Bangalore

Earlier, RCB skipper, Virat Kohli won the toss and elected to bat first, as he moved in with an unchanged squad, while MI skipper, Rohit Sharma made a couple of changes, in the form of Lasith Malinga coming in for Merchant de Lange and Jasprit Bumrah for R Vinay Kumar. Live Scorecard: Mumbai Indians vs Royal Challengers Bangalore 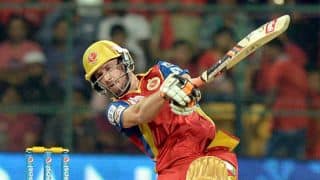