West Indies powerhouse and hard-hitting opener Chris Gayle became man to hit most sixes in Twenty20 Internationals (T20Is) till date. He also surpasses New Zealand’s Brendon McCullum, who previously held the record with 91 sixes. He also surpassed him for scoring most half-centuries in the format. He achieved the feat during the match against former champions England, in Match 15 of Super 10 round of the ongoing ICC World T20 2016 at the Wankhede Stadium in Mumbai on Wednesday. Currently, West Indies are 24 for the loss of a wicket in three overs, with opener Chris Gayle on 10 and Marlon Smuels on 13. Earlier, West Indies skipper Darren Sammy won the toss and elected to bowl first, as England finished on a challenging total of 182 for the loss of six wickets. LIVE CRICKET SCORECARD: England vs West Indies, Match No.15, ICC World T20 2016 at Mumbai

With the Round-1 done and dusted, it is now time to head into the Super 10 stage of the ICC Twenty20 (T20) World Cup 2016, India. We gear up in the battle of the former champions as England take on West Indies in Match No. 15, Super 10 Group 1 at Wankhede Stadium, Mumbai on Wednesday. England who won the trophy way back in 2010 with West Indies lifting it in the next edition in 2012. England, West Indies are clubbed with defending champions Sri Lanka, South Africa and qualifier Afghanistan in Group 1. Both England and West Indies, will want to attain the much needed win, with no breathing space left going into the business end of the tournament. LIVE CRICKET UPDATES: England vs West Indies, Match No.15, ICC World T20 2016 at Mumbai 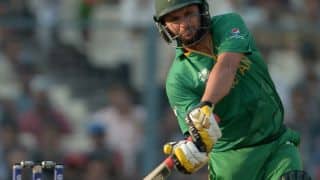