The reports by Fairfax Media followed an uproar after Chris Gayle attempted to flirt with an Australian presenter during a broadcast interview.

London: West Indies swashbuckling batsman Chris Gayle is scared of being around women in public after stories surfaced alleging that he exposed himself to a female massage therapist in a Sydney dressing room, a court has been told. Jamaican-born cricket coach Donovan Miller, who is now based in the English county of Essex, told the New South Wales Supreme Court that he had known Gayle for more than 22 years now and had become close to him because of his work with the Chris Gayle Foundation. “He always feels someone is out to get him…You can see the incident has affected him. When you look in his eyes…,” the Guardian quoted Miller, as saying. Masseuse cried uncontrollably after Chris Gayle exposed himself, says Court

Gayle has decided to sue Fairfax Media for defamation over a series of articles published alleging that he exposed himself to a team of massage therapist during a Sydney training session in the 2015 Cricket World Cup. When quizzed about Gayle’s reputation prior to the publication of these articles in January 2016, Miller insisted that everyone used to love him and that he was a big role model to young cricketers. Miller further revealed before the court that they all thought this was a joke when the exposure claims were first aired. Chris Gayle denies exposing himself to massage therapist; blames Australian media for defaming him

The reports by Fairfax Media followed an uproar after the big-hitting Caribbean batsman attempted to flirt with an Australian presenter during a broadcast interview, asking her out on a date before adding the ‘Don’t blush baby’ remark. The hearing is scheduled to run for the next 10 days. 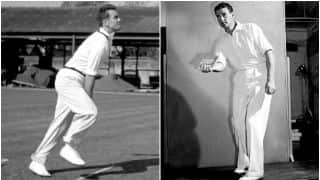