Chris Gayle s 94-run effort to save his side proved to be futile as hosts England handed West Indies a 124-run defeat in the third ODI.

Chris Gayle s 94-run effort to save his side proved futile as hosts England handed West Indies a 124-run defeat in the third ODI. The visitors won toss and put England to bat at Bristol on Sunday. England, thanks to Joe Root, Ben Stokes and Moeen Ali, put up a huge 369 for 9 at the end of their 50 overs. Despite Gayle playing an impressive knock, any of his teammates failed to match up to his effort as West Indies collapsed for 245 with 10.5 overs still remaining. With the victory, England now lead the five-match series 2-0.

After a not-so-impressive start by the openers, Joe Root and Ben Stokes took charge of England s batting. Both scored half-centuries while taking England from 74 for 3 to past 200. West Indies, who struck early to remove Jonny Bairstow (13) and Eoin Morgan (0) cheaply, could not stop the Root-Stokes duo from putting up a 132-run partnership. But soon after England had 200 on the board, both Root (84) and Stokes (73) were removed in quick succession, which brought West Indies back into the game.

Moeen Ali stole the show thereafter. The West Indies bowlers had very little to do to combat Moeen’s merciless hitting. He put up a 53-ball century, which is the second-fastest by any Englishman. His knock propelled England to a challenging total of 369 for 9 at the end of their innings.

Miguel Cummins was West Indies’ pick of the bowlers with 3 for 82 followed by Jason Holder who had the second best figures (2 for 81) among his teammates.

West Indies batted with an aggressive mindset from the very beginning, due to the pressure of chasing 370. However, their batting collapsed in front of England’s skillful bowling and fielding. Gayle put in all his experience to help his side in the time of need but he hardly found any support from the the other end. He scored his first ODI fifty since 2015 but was unlucky to be denied of his century for 6 runs. Adil Rashid effected a run out with a direct hit to get the most crucial wicket of the match that of Gayle.

After Gayle’s departure, Jason Holder showed some resilience but not for long as Liam Plunkett and Adil Rashid ran through the line-up to help their side to a 124-run victory.

Plunkett’s 5 for 52 was the best figure by any bowler in the match today. Rashid bagged 3 wickets and effected a run out, turning out to be one of the major contributors behind the victory. 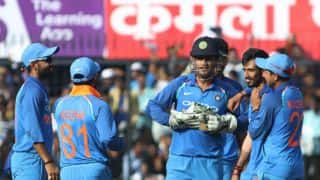