Gayle had smashed the 30-ball century for Royal Challengers Bangalore against Pune Warriors in the 2013 edition of Indian Premier League.

A Trinidad  and Tobago batsman, Iraq Thomas, smashed the fastest Twenty20 century when he reached the feat in just 21 balls, thereby breaking Chris Gayle’s record of 30-ball century in T20 cricket. The 23-year-old cricketer from Tobago hit the hundred during a match in the Tobago Cricket Association’s T20 tournament at Louis D’or on Sunday. He was representing Scarborough/Mason Hall as he finished with an unbeaten 131 off 31 balls to help his side chase Speyside’s target of 152 in just 8 overs. Gayle had smashed the 30-ball century for Royal Challengers Bangalore against Pune Warriors in the 2013 edition of Indian Premier League at the Chinnaswamy Stadium and he had remained unbeaten at 175. FULL CRICKET SCORECARD: Sunrisers Hyderabad vs Royal Challengers Bangalore, IPL 2016 at Hyderabad

According to Trinidad Guardian, Thomas had played a match earlier in the day before facing Speyside. In the first match he slammed 97 of 53 against Charlotteville but an unbelievable knock was surely reserved for the next match which eventually turned out to be a world record in domestic cricket.

Talking about the achievement, the former T&T U-13 player said, “I was just very happy to reach my first T20 century. I have played cricket for a while and to get this century in the shortest format left me very happy. I played for Queen’s Park in Trinidad, so coming into this tournament I had some good experience having played at that level in Trinidad.”

He went on to add that since the ground was not very big and this gave him the confidence to go after the bowlers. “You can even chase down 180 on this ground because it is not the biggest and it gave me real confidence to go after the bowlers. I never thought I would get the runs as quickly as I did but after hitting a few, I realised that something special can happen out there and it came through,” Thomas said. 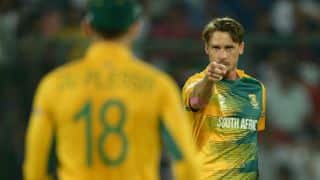