WIPA often at loggerheads with the WICB in a long-standing battle over contracts and payments.

Sydney:  Dave Cameron was blasted on Sunday for apparently retweeting a demand for outspoken West Indies cricketer  Chris Gayle to be given “a retirement package”. In the latest controversy to hit the ICC Cricket World Cup 2015 team, West Indies Cricket Board (WICB) president Cameron’s behaviour was condemned as “unacceptable” by players’ representatives.

The drama unfolded during the Windies’ match against Pakistan at Christchurch on Saturday when Gayle was out for four, stretching his run without a century in ODI cricket to 20 matches. One fan tweeted: “Gayle goes… Can’t buy a run. Let’s give him a retirement package … Can’t fail repeatedly and still front up based on reputation”.

Cameron then apparently retweeted the post even as the match was ongoing. The West Indies Players Association (WIPA), often at loggerheads with the WICB in a long-standing battle over contracts and payments, immediately denounced Cameron.

“WIPA is extremely disturbed by the unacceptable re-tweeting by Mr. Dave Cameron, President of the West Indies Cricket Board (WICB), of a negative “fan” tweet which was directed at our member Mr. Christopher Gayle,” said a statement.

“That Mr Cameron’s retweet came in the middle of the West Indies team’s critical game against Pakistan renders it even more unacceptable.” WIPA chief executive Wavell Hinds added: “We denounce any such behaviour by any official of the WICB in any given circumstance.”

Cameron, who is seeking re-election, apologised for his actions and removed the post from his account. “No offense intended. Full apologies extended. Rally round the West Indies,” he wrote on @davec51.

On the eve of the World Cup, Gayle had accused the WICB of victimisation after Dwayne Bravo and Kieron Pollard were axed from the squad for their roles in the abandoned tour of India last year.

Gayle has since been summoned to appear before a disciplinary board to explain his comments. Despite the controversy, the West Indies went on to defeat Pakistan by 150 runs at Hagley Oval on Saturday. 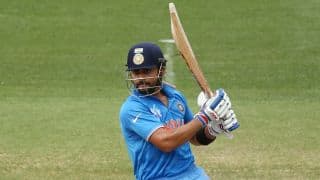