A rebound catch for a fast bowler in his follow through is always a tough ask and one of the most difficult jobs in cricket.

A rebound catch for a fast bowler in his follow through is always a tough ask and one of the most difficult jobs in cricket. Not only the bowler is in motion in his follow through, he also needs to exhibit brilliant reflexes. Most of the fast bowlers in the world aren’t great fielders but Chris Jordan on this occasion broke the myth when he effected an unbelievable caught and bowled.

During the LV County Championship Division One match between Nottinghamshire and Sussex at Trent Bridge, the home side were already a wicket down after opener Brendan Taylor was caught leg before. The other opener Steven Mullaney was finding it tough to deal with the lethal pace and bounce of Sussex bowlers. In the sixth over, Jordan bowled a quick one which was drifting on to the leg stump of Mullaney. He attempted to push it towards the mid wicket but the ball came off a thick edge and flew to the left of Jordan. The bowler was in his follow through and just when the ball seemed to make its way to the surface, Jordan dived towards his left and cupped the red cherry with his left hand to complete an incredible catch.

Jordan later also picked the wicket of Alex Hales and scored a tenacious 39 with the bat in the first innings. Jordan’s heroics couldn’t prevent a Sussex defeat but the catch will truly be remembered as one of the finest displays of caught and bowled. 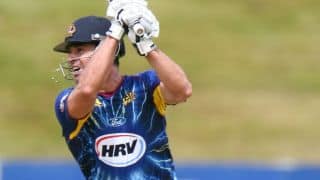