Chris Lynn says he’s against the T20 World Cup set to be hosted by Australia later this year predicting it to be a logistical nightmare. The fate of the showpiece T20 event remains shrouded in mystery with reports claiming ICC will not take a call before July.

Australia has closed its borders till September end in wake of coronavirus pandemic and is is scheduled to host the world cup in October-November.

“My personal opinion is no,” Lynn. “Obviously we’re praying for it to go ahead but we’ve just got to play what’s in front of us.”

“Having teams come from all over the world is going to be a logistical nightmare. Hotels, travel, keeping the teams in the hotels for a number of weeks before the tournament is going to be tough work moving forward,” he said.

Cricket Australia (CA) CEO Kevin Roberts had last week said that they are working with the various stakeholders to understand the possibility of going ahead with the tournament.

“Cricket Australia is working closely with the ICC, the Local Organising Committee and the Australian government so we have a comprehensive understanding of exactly what it will take to be able to play the ICC Men’s T20 World Cup 2020 in October in Australia as planned,” Roberts had said.

With cricket events halted due to the ongoing health crisis, boards across the globe are expecting financial hit.

CA has already laid off majority of its staff till the end of financial cycle and there are talks that players may expect pay cuts.

“No-one likes to take pay cuts but I think for the longevity of the game you’ve got to be realistic,” Lynn said. 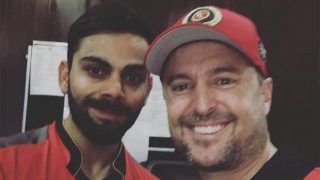