Rogers finished his illustrious First-Class career with 25,470 runs from 313 games, including 76 centuries in a career which began in 1998-99.

Former Australian opener Chris Rogers, who had bid adieu to international cricket after the fifth Ashes Test in 2015, has finally called it quits from First-Class cricket as well. The left-handed batsman, who represented Australia in 25 Tests between 2008 and 2015, announced his retirement from First-Class cricket following Somerset’s final County Championship match against Nottinghamshire at Taunton. Rogers registered twin hundreds in the match which Somerset won by 325 runs to sit at the top of the table heading into the final day of the season. Should Yorkshire or Middlesex fail to win at Lord’s, Somerset will lift their first Championship title.

The 39-year-old cricketer signed off his First-Class career in style, as he notched up scores of 132 and 100 not out batting at No. 3. The Somerset captain, Rogers also ensured before leaving his side that it has the best chance to lift their first title. “That’s it for me,” he said. “I have had a good career and to finish off that way is pretty special. I’m getting old. I am going to miss playing and the standing ovation from the crowd was very special, but it happens in all careers and it’s time to move on,” Rogers told the media after the game. He also posted a formal tweet from his official Twitter handle, confirming his retirement. He wrote:

Very proud to call it a day. Enjoyable career with so many gr8 friends Thanks to so many @CricketAus @SomersetCCC @ECB_cricket @bushrangers

Rogers finishes his illustrious First-Class career with 25,470 runs from 313 games, including 76 centuries in a career which began in 1998-99. Before the start of this season, Rogers took the responsibility of captaincy from Marcus Trescothick. This was his fifth County side, as he had previously spent four seasons at Middlesex besides playing for Leicestershire, Derbyshire and Northamptonshire. For Australia, Rogers made 25 appearances in Tests, scoring 2,015 runs at 42.87. 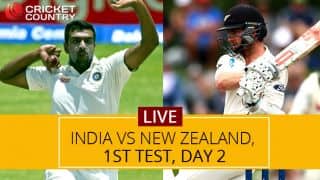