Little-known Namibian batsman Christi Viljoen fell two short of his maiden first-class hundred as England's bowlers were given a good work-out in their tour opener against a ICC Combined XI on Saturday. 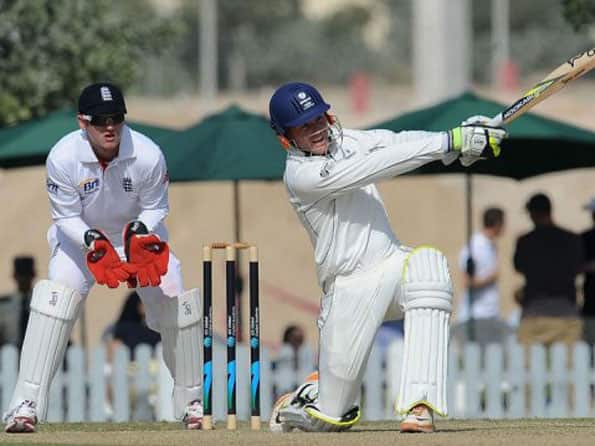 Little-known Namibian batsman Christi Viljoen fell two short of his maiden first-class hundred as England’s bowlers were given a good work-out in their tour opener against a ICC Combined XI on Saturday.

The 24-year-old right-hander struck his highest first-class score of 98 to help his team recover from a precarious 177-8 to 281 all out on a typical slow pitch at the Global Cricket Academy Ground here.

In reply, England closed the first day at 16-0 with Alistair Cook and Andrew Strauss both unbeaten on eight, as they seek a good innings before the first Test against Pakistan starts here on January 17.

England will play another three-day match, against a Pakistan Cricket Board XI, also in Dubai from January 11-13.

England, who won the toss and decided to bowl first, were given a good start by fit-again paceman Stuart Broad who dismissed the Irish opening pair of William Porterfield (one) and Paul Stirling (seven) and Scotsman Kyle Coetzer (one) in his first three overs.

Stockily-built Afghan batsman Mohammad Shahzad produced an aggressive innings of 51 off just 58 balls before Combined XI were rescued by Viljoen.

Viljoen added 59 for the eighth wicket with Scotland’s Majid Haq (26) and another fighting 96 for the ninth wicket with Ireland’s Boyd Rankin, who made 43.

Viljoen, whose previous highest score was 87, hit 13 boundaries and a six during his 189-ball knock.

Broad said it will be tough on such flat tracks.

“It is going to be crucial for us in the Tests to use the new ball and the second new ball wisely. That period from overs 50 to 80 is going to be a real holding role,” said Broad, playing his first big game since a shoulder injury last year.

“We got the ball reverse (swinging) a tiny bit today (Saturday), but the pitch had gone slow by then so it was hard to burst through the defences. The bowling unit were aware (it will be difficult to take 20 wickets).

“We are pretty happy to have bowled them out, but it was hard work. I think we are all aware the Test series is going to be like that. It is going to be attritional cricket, going at 2.5 runs per over, and fielding for long periods of time.”

Viljoen was disappointed at missing his maiden hundred.

“Really a big day for me. I am gutted to have missed out on a hundred. I have always dreamt of playing top teams. Hopefully there will be more to come,” said the Namibian. (AFP)

Former players back Brad Haddin to continue as Australia's No.1 'keeper

Stuart Broad pleased with his recovery from shoulder injury