After meeting West Bengal chief minister Mamata Banerjee, Indian pacer Mohammed Shami‘s estranged wife Hasin Jahan sought Board of Control for Cricket in India’s help to solver her legal matter with her husband, but the board’s acting president C.K. Khanna has refused to be drawn into their personal matter.

“Hasin Jahan met me with a request that BCCI should look into the matter. I told her that it was their personal affair which should be settled within the family. It would be interest of all, including Shami, because he is in the Indian team and we would like him to perform well in the IPL and forthcoming England series,” Khanna told ANI post her meeting with Jahan.

He further informed, “She requested me that I should try to put some personal pressure on him. I told her that it would not be possible for me as BCCI cannot intervene in such affairs and she has to seek the help of her family.”

The BCCI had already given Shami a clean chit in an inquiry conducted by its Anti Corruption Unit (ACU).

Jahan has accused Shami of physical and mental abuse, and of having extra-marital affairs. A case has also been registered against the fast bowler on the basis of a written complaint filed by her.

Earlier in the day, Jahan said, “Shami is just trying to gain sympathy from media. He does not care about me and our daughter. I am living in a small guest house here but he had not contacted me even once to meet his daughter.” 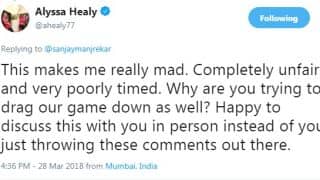