Armaan Jaffer, the 20-year-old Mumbai batsman, has scored an unbeaten triple-hundred for Mumbai in the 2018-19 CK Nayudu Trophy, the zonal four-day tournament for Under-23 cricketers.

Jaffer, nephew for former India Test opener and domestic titan Wasim Jaffer, made 300 not out off 367 balls with 26 fours and 10 sixes as Mumbai – in reply to Saurashtra s 175 all out – stormed to a mammoth 610/5 declared in 139.4 at the Wankhede Stadium.

Jaffer – who has played three first-class matches for Mumbai in the Ranji Trophy – came to the crease at No 4 after his team lost two wickets in successive balls to slump to 12/2 in the sixth over. With the opener Rudra Dhanday, who made 166 off 216 balls, Armaan added 281 for the third wicket, and then stands of 46 with Ashay Sardesai (24), 182 with his captain Shams Mulani (87) and 89 with Siddharth Akre (20*).

As soon as Armaan reached his triple-hundred, Mulani declared the innings. Mumbai are currently sixth on the Elite Group A and B points table.

Armaan was part of India’s Under-19 team at the 2016 junior World Cup and been on IPL franchise Kings XI Punjab’s roster. 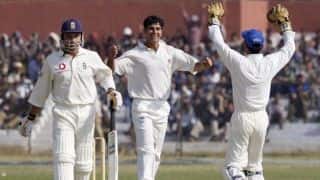