Claire Polosak will be standing with Paul Wilson in the List A match between New South Wales and Cricket Australia XI at Hurstville Oval.

Claire Polosak will become the first woman to officiate as an on-field umpire in an domestic men’s game in Australia. ESPNCricinfo reported that she will be standing with Paul Wilson in the List A match between New South Wales and Cricket Australia XI at Hurstville Oval on Sunday. She will join the league of Kathy Cross (New Zealand), Jacqueline Williams (West Indies) and Sue Redfern (England) as female umpires in domestic cricket. Earlier this year, in May, Eleni Glouftsis from South Australia became the first woman to stand as a field umpire in an Australian Football League (AFL) men’s match.

“A little bit nervous, but if you don’t have a little bit of nerves, you don’t care,” a 29-year-old Polosak told ESPNCricinfo. “So it’s all about getting all the butterflies going in the same direction. Planning on going out there and having my routines, get through the first ball and go through it from there. I love the challenge, watching balls, being out there, the camaraderie between umpires as you’ve come through is really good, it’s a family, the challenge of having to answer decisions is always good.

“I never played cricket, but I always followed cricket, and my parents got me into it [umpiring], Dad used to drive me up from Goulburn to do the umpires course here. It took a few times to pass but it was something I was determined to do and I just kept working through the grades in Sydney competition.

“I got a phone call from Simon Taufel [to say I would umpire on Sunday]. I followed Simon when I was a lot younger growing up, he was at his peak, so to have the phone call from him was quite special.”

Polosak has officiated in men and women’s cricket. She feels women’s game is more difficult to judge because of high standards of fielding while in men’s cricket the higher speed of the ball makes it difficult to determine nicks off the edges.

Apart from being an umpire, she also works in a female engagement and umpire education at Cricket NSW. She is working in order to “improve numbers” of females coming through the ranks. 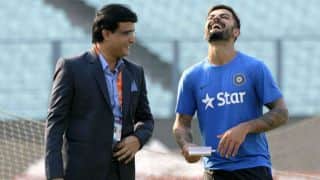