Australia captain Michael Clarke vowed to strive for a 3-0 clean sweep against Sri Lanka in the final Test starting Thursday to give retiring batsman Michael Hussey a fitting send-off. 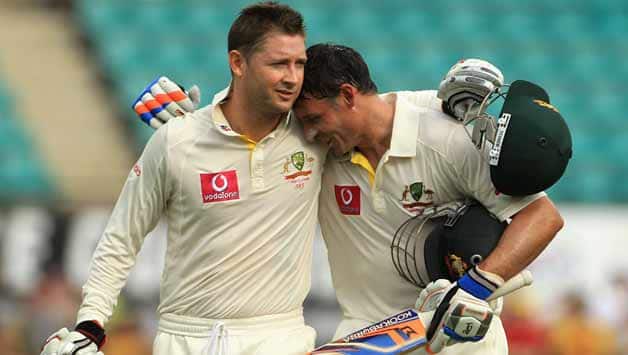 Australia captain Michael Clarke vowed to strive for a 3-0 clean sweep against Sri Lanka in the final Test starting Thursday to give retiring batsman Michael Hussey a fitting send-off.

Clarke has opted for a four-man pace attack after Australia’s crushing innings victory against the tourists in last week’s second Test at the Melbourne Cricket Ground.

Clarke declared himself fit and will bat at four in place of Shane Watson, ruled out with a calf injury. All-rounder Glenn Maxwell was named 12th man, meaning Usman Khawaja misses out.

Although a dead rubber, Clarke said the game had taken on special significance after veteran middle-order batsman Hussey declared it would be his final Test, with the squad determined to see him off with a flourish.

“When guys retire it’s extra special to get a win in that last game for them and I’m certain this Test match will be no different in regards to Michael Hussey,” Clarke said.

“I think a lot of guys will be emotional that Mr Cricket’s finishing up in Test match cricket after this game… we want to make sure that we send him out on a high,” he added.

“Our focus is to win this Test match and to have beaten Sri Lanka 3-0 in this series.”

Clarke said his own hunger for success had increased with news of Hussey’s retirement and he was confident of a big score after making 106 in Melbourne, adding his hamstring had improved.

The skipper said he also hoped that Hussey, 37, who has been in exceptional form, averaging 180.00 in the past two Tests, would make one final Test ton.

Hussey is the second experienced hand to vacate Australia’s middle order this summer, with Ricky Ponting recently calling time on his 17-year career.

The departures come ahead of a critical 12 months for Australia, with a tour of India starting in February followed by Ashes series in England and Australia.

Clarke denied there was new pressure on him with the loss of Ponting and Hussey. He predicted a new generation of leaders would emerge in the squad.

“I think over the next 12 months you’ll see these young players stand up, because they’re ready for it,” he said.

“They look forward to this challenge, as I do, and I don’t think my role (as captain) will change too much at all.”