Sydney Sixers' all-rounder Steve Smith said his team is lucky to sneak into the Champions League Twenty20 final after fortunes swung like a pendulum in its semi-final clash against Titans. 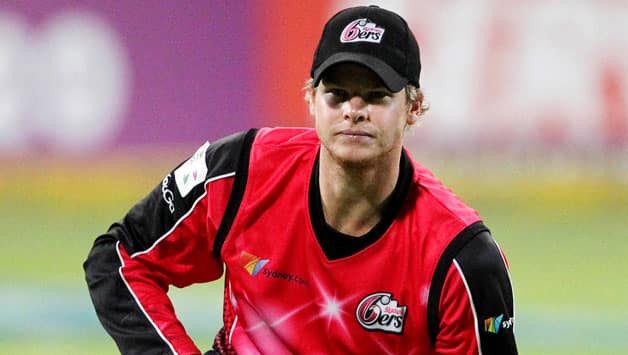 Sydney Sixers‘ all-rounder Steve Smith said his team is lucky to sneak into the Champions League Twenty20 final after fortunes swung like a pendulum in its semi-final clash against Titans.

Sixers won the battle of nerves against the Titans on Friday night. Needing eight runs from the final over to reach the target of 164, Sixers’ Pat Cummins steered the team home for a bye off the last delivery as the Big Bash Champions won the most thrilling match of an otherwise drab Twenty20 competition.

“The Titans were terrific opposition and they played great cricket throughout the tournament. It’s just that we were lucky to sneak home in the end,” said Smith.

“We started beautifully with the bat; we were flowing and had 70-odd runs in seven overs, chasing 164. We were cruising before the fall of wickets put us on the back foot. There were a few occasions where we struck back in and they got back into it again. There was never any moment where we thought we had the match in our hands.

“We did our best to let them back in the game and it was a very tight finish. You couldn’t have asked for a better spectacle. We just managed to scrape back home in the end,” he added after his team’s two-wicket win off the last ball.

The Sixers will hardly have any time to recover from this humdinger of a match before they focus on the big final on Sunday against Highveld Lions of South Africa.

This will be the second contest between the two finalists in this tournament, the first being won the Australian side by five wickets, at Newlands. Smith believes that result will give them an edge.

“They’re a quality side and have played very well so far.

The fact that we have defeated them in the tournament once, will give us a little bit of extra confidence going into the match,” he said.

“For us it’s just about going back to the basics and playing smart cricket. If we play the way we know we can play, we’ll be right there at the end of this tournament,” he added.

Smith, however, cautioned that the side needs to guard against becoming over-confident.

“The complacency can creep in sometimes but we are here to do a job and there’s no point losing focus after reaching this stage. We have done well so far and we want to end up winning the big prize,” he said. (PTI)

Vinoo Mankad: In the league of Gary Sobers & Keith Miller as a genuine, world class all-rounder

Lewis Hamilton: I am a fan of West Indies cricket