Chennai Super Kings made a mockery of what seemed like a commanding target of 186 set by Titans, chasing it down with seven balls to spare to win their Group B encounter in the Champions League T20 (CLT20) 2013 at Ranchi.

Chennai won by 4 wkts
Man of the Match: Suresh Raina 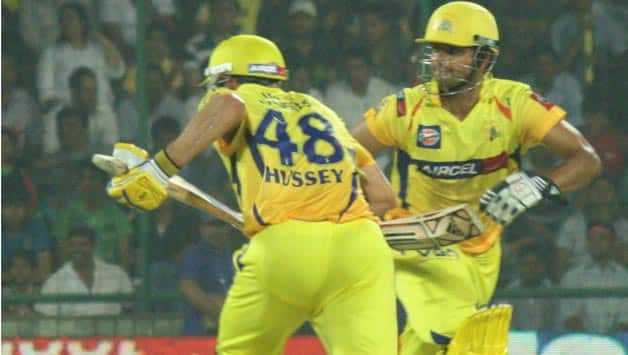 Suresh Raina (right) and Michael Hussey put on 89 runs for the second wicket for Chennai Super Kings, that played a crucial part in their team’s win © IANS (File Photo)

Chennai Super Kings made a mockery of what seemed like a commanding target of 186 set by Titans, chasing it down with seven balls to spare to win their Group B encounter in the Champions League T20 (CLT20) 2013 at Ranchi. Chennai moved up to second place in their group in the points table, behind Trinidad and Tobago on net run-rate.

Swashbuckling half-centuries from numbers one and three from each side —captain Henry Davids (52 off 43 balls) and AB de Villiers (77 off 36 balls) for the Titans, and Michael Hussey (47 off 26 balls) and Suresh Raina (47 off 28 balls) for Chennai — made up 223 runs of the 372 (60 per cent) scored on the day. But in the end, it was the men in yellow who prevailed, thanks mainly to the 89-run stand between Hussey and Raina, that took up only 44 deliveries.

Earlier, the Titans put on an imposing 185 for five after being asked to bat. De Villiers’s knock, coming in one-down, included three fours and as many as seven sixes, and took all the spotlight away from Chennai captain and home boy MS Dhoni’s new hairstyle, which had become the talk of the town prior to the start of the match.

The South African One-Day International (ODI) captain, de Villiers, got into the action after the halfway mark of the innings, after Jacques Rudolph and Henry Davids put on 46 for the first wicket. He began by launching slow left-arm spinner Ravindra Jadeja into the stands behind deep midwicket. The crack emanating from de Villiers’s blade resonated across the stadium as he found the middle of the sweet spot. Bravo was carted over long-on for another half-a-dozen, before Jadeja was dealt with similarly in the next over. The biggest of de Villiers’s sixes travelled 95 metres, as he set the benchmark for the tournament. Titans’ second fifty was brought up in just 25 balls with de Villiers himself going at a strike rate of more than 200.

Davids brought up his half-century off 43 balls by spotting Ashwin’s pause-and-deliver technique and swept him for four. However, he was stumped off the next ball after dancing down to a wide ball and missing it completely. It ended a 76-run second-wicket partnership that was brought up off just 37 balls. The new man Farhaan Behardien did not allow CSK to breathe easy as he smashed Bravo for two consecutive boundaries to take the score to 135 after 15 overs, setting up a blistering finale.

The toe end of the bat and the strong forearms of Behardien’s bat was enough to send Ashwin over cow corner, before de Villiers brought up his half-century off just 27 balls with an inside-out smash over long-off in Holder’s over. Then, Bravo got two wickets in an over via the short ball, sending Behardien (21) and David Weise (0) back.

De Villiers, meanwhile, continued with the pyrotechnics and pummelled the bowling in the ‘V’, hitting Jadeja for two sixes and a four in an over, before a miscued biggie led to him being caught at long-off to make it 179 for five in 19. Bravo bowled a quite last over, conceding just six, to end with figures of two for 34, but with his team still facing an uphill task in avoiding defeat.

Chennai’s evening got murkier as Roelof van der Merwe bowled Murali Vijay for a golden duck in the very first over with the arm ball that completely baffled the batsman. However, this brought together the awesome twosome of Hussey and Raina, who had scored 1,281 runs between them in the 2013 IPL. The duo immediately looked to counterattack the Titans and did not let the visitors to settle, as they scored 13, 24 and 15 runs off the third, fourth and fifth overs of the innings, and slowly got the required rate down.

The Titans’ bowlers weren’t helped by difficult conditions in the field where they had to deal with a lot of dew, thereby giving CSK plenty of easy runs. However, the class and the flamboyance in the batting from the two Chennai batsmen was there to be seen as they got the bowlers, as well as the home crowd, dancing to their tunes.

Raina was to mistimed a shot straight to mid-off and lose his wicket on the last ball of the eighth over, after making a blitzy 47 off 28 balls, including five fours and two sixes. A couple of overs later, Hussey succumbed to the mid-off fielder as well, even falling on the same score as Raina, his 47 coming off 26 deliveries, studded with seven fours and one maximum. However, as Chennai reached 114 for three at the end of the 10th, the required rate, which had trickled down from above nine to just over seven, looked like a stroll in the park for the rest of the batsmen.

Bravo then walked in and hammered a quickfire 38 off 26 balls, and Dhoni (7) hit a six to please the home crowd, before Albie Morkel finished things off in the penultimate over.