Misbah-ul-Haq’s unbeaten knock of 93 took Faisalabad Wolves to 146 for six in their 20 overs against the Kandurata Maroons in the Champions League T20 2013 dead-rubber Qualifier at Mohali on Friday. 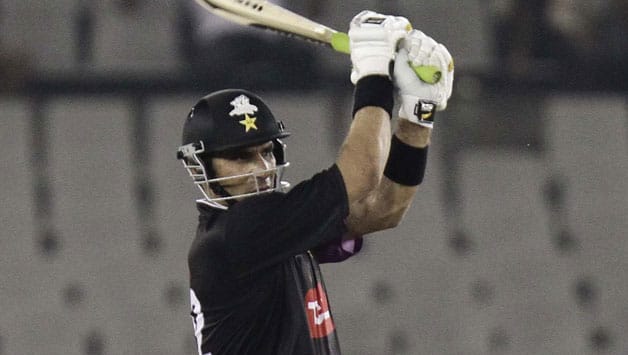 Misbah-ul-Haq’s unbeaten knock of 93 took Faisalabad Wolves to 146 for six in their 20 overs against the Kandurata Maroons in the Champions League T20 2013 dead-rubber Qualifier at Mohali on Friday.

Misbah smashed six boundaries and five long sixes in his 60-ball innings to take Faisalabad to a competitive total after the side got off to a poor start.

Earlier in the day, Kandurata skipper Lahiru Thirimanne won the toss and elected to field. The Sri Lankan franchise made two changes to their side. They brought in Lahiru Jayaratne and Milinda Siriwardana in place of Kaushal Lokuarachchi and Shehan Jayasuriya. On the other hand, Faisalabad Wolves fielded an unchanged team.

Even as the Mohali heat was setting in and the temperature hovered around 35 degree Celsius, the innings got off to an entertaining start.

To the excitement of players and the sparse crowd that had gathered, Ammar Mahmood lofted the first ball of the innings just above the head of the fielder stationed at mid-on. The batsman followed it up with a similar shot over mid-off. However, the second time, he didn’t get enough elevation, but the fielder ensured that he was lucky to survive. In the fourth ball of the same over, Mahmood survived a close leg-before appeal and scampered through for a single. Nonetheless, his opening partner Ali Waqas wasn’t as lucky as he edged his first delivery to the wicketkeeper and was dismissed for a Golden Duck.

Both Dilhara Lokuhettige and Nuwan Kulasekara used the heavy wind to their advantage to get movement off the air. However, with the pitch playing true, the ball came at a good pace to the bat.

After bowling the first over from the Pavilion End, Kulasekara was taken off the attack and brought in from the City End to take the best advantage of the wind. The move worked immediately as Asif Ali was dismissed after he poked his bat out to an away going delivery. Ali was looking good with his wristy 10-ball 10 run play.

Misbah, coming in to bat at No 4, couldn’t help but watch his teammates losing unnecessary wickets. Mahmood played a rash slog which took the top-edge and was easily pouched by Upul Tharanga, who ran to his left from mid-on.

In a rather uncharacteristic move in the seventh over, Misbah played a risky loft over long-off. Although it wasn’t timed well, the ball just managed to sail over the fielder positioned there and cross the boundary rope. He displayed more aggression against Siriwardana, who came in to bowl his second over, as he carted him for a four through the off and a huge straight six.

However, just when Faisalabad looked to regain control of the innings, Ajantha Mendis caught Khurram Shehzad in front of the stumps with a loopy wrong one to reduce them to 56 for four in less than 10 overs.
Following that, Misbah tried to take charge of of the innings. In company of Mohammad Salman, he added 74 runs for the fifth wicket in 52 balls.

He brought up his half-century in 41 deliveries. It was his seventh fifty in 10 innings across formats and third consecutive half-century in the tournament. Following the 15th over, he started accelerating. He smashed a six and three consecutive boundaries off Suraj Randiv in the 16th over of the innings. He followed it up by scoring 16 runs in the next over off Nuwan Kulasekara.

Coming into the last over of the innings, Misbah was batting on 82. Eleven runs were scored off the final over and Misbah finished on 93. Will this be enough for the Wolves to record their first win in the competition or will Maroons, batting second for the first time in this tournament qualifiers, record a win?