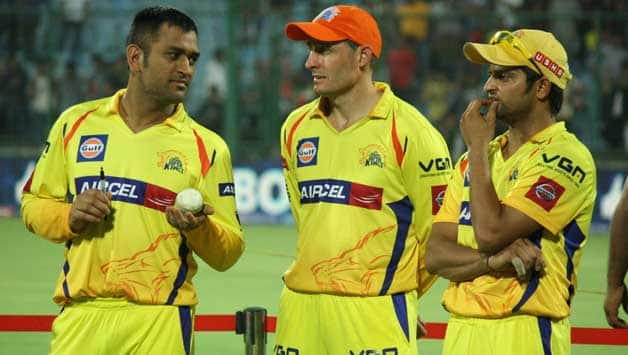 Hussey (47) and Raina (47) swung the match decisively in Chennai’s favour with their 89-run stand in just 44 balls for the second-wicket, which helped them chase down the daunting target of 186 with seven balls to spare at the Jharkhand State Cricket Association Stadium.

“It was a difficult target to chase, but Raina and Hussey batted really well. We were just looking to see how the first 10 overs were going to turn out as the ball would be drier and could swing. But they saw through that period well and after that they attacked and put the bad balls away which is very important during a chase like this,” said Dhoni at the post-match presentation ceremony.

“What really pleased me most was when Hussey and Raina got out and came back into the dressing room, they were really upset and that really says a lot,” he added.

Dhoni said his bowlers need to tighten up things as they progress into the tournament.

“I was a little worried initially after we’d given away so many runs, but we’ll have to tighten up. Our bowlers need to tighten up. Even saving six or seven runs makes a difference because say it’s the 20th over, it could be the difference between chasing 11 runs or 18,” he said.

Titans‘ skipper Henry Davids said the dew made things difficult for them while admitting that leaking 24 runs in extras did not help their case either.

“It was a very good score, defendable score but we gave away far too many extras. Back of a length balls on the stumps were difficult to get away and that was the plan. We just couldn’t execute it. The dew made things difficult as well, as the bowlers couldn’t grip the ball well enough,” he said.

Man-of-the-Match Raina said his stint with the India A side when they toured South Africa helped him overcome his perceived weakness against bouncing deliveries.

“My stint with India A side when we went to South Africa helped me work on my short-ball play,” he said.

Raina said he was concentrating on timing the ball as well as he could. “We knew Titans have bowlers that could bowl over 140kph.”

Hussey said Titans had set a good target for Chennai, but he was aware that dew on the ground would make it difficult for spinners to grip the ball.

He said he has always enjoyed batting with Raina and his knock on Sunday took pressure off him.

“We wanted to get a good start and then work on that. It wasn’t a preconceived attack but Raina is just an amazing talent and with him hitting the ball so cleanly, it took a lot of the pressure off me. I enjoy playing with these guys and we’d like to round off a successful six years with a good tournament here,” he said.