Neil Broom brushed aside the Perth Scorchers' bowling attack with remarkable brutality as he slammed a century — 117 off 56 deliveries — in the company of Ryan ten Doeschate (66 off 26 deliveries) to post a mammoth total of 242 for four against the Otago Volts in the Group A match in the Sawai Mansingh Stadium at Jaipur. 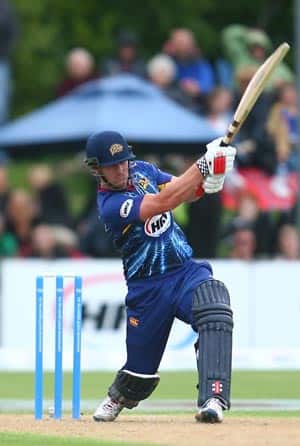 Neil Broom brushed aside the Perth Scorchers‘ bowling attack with remarkable brutality as he slammed a century — 117 off 56 deliveries — in the company of Ryan ten Doeschate (66 off 26 deliveries) to post a mammoth total of 242 for four against the Otago Volts in the Group A match in the Sawai Mansingh Stadium at Jaipur.

Broom and Ten Doeschate’s partnership of 128 from just 48 balls for the fourth wicket proppelled their side to such a daunting total.

Winning the toss and opting to field, Perth Scorchers’ skipper Simon Katich took a leaf out of Rajasthan Royals’ skipper Rahul Dravid’s book and started the proceedings with Michael Beer. Katich mixed it up and brought on the 20-year-old Joel Paris to bowl for the first time in T20s. He had a dream start as he picked up two wickets off the first two deliveries — the first ball was a length delivery pitched on middle and leg and straightened to hit Hamish Rutherford’s pads in line. He followed it up with another swinging delivery and picked up the big wicket of Brendon McCullum.

Derek de Boorder then joined Neil Broom in the middle and began to rebuild the innings after a couple of early jolts. The duo played their shots and got the scoreboard ticking. They took the side past the 50-run mark in the eighth over. Katich, who was making a lot of changes in the bowling to unsettle the batsmen, brought on right arm spinner Adam Voges into the attack. This move yielded a wicket and a much-needed breakthrough.

Voges was taken apart by Boorder with a reverse sweep boundary followed by a huge six over midwicket. However, Voges made an excellent comeback with a tossed up delivery that went through the defense of Boorder to crash onto the stumps. With the Volts on 77 for three, all-rounder Ryan ten Doeschate walked out.

Doeschate took up an over to get his eye in before he joined hands with Broom to tear apart the Scorchers’ bowling. The duo punished Voges in his second over, picking up 23 runs from the over. In the following over off Beer, Broom started off with a four straight down the ground and brought up his half-century in style with an exceptional inside out shot over extra cover for a six. His half-century came off 34 deliveries.

He wasn’t done yet as he took apart another debutant Birt Cockley and collected three consecutive boundaries. Ten Doeschate joined the party and took 15 runs off the following over to take his side to 149 for three from 15 overs. The Scorchers were clearly feeling the heat on a bright sunny day at the Sawai Mansingh stadium and had no answer for the onslaught from the duo who were only dealing in boundaries.

The next two overs costed 39 runs as the Ten Doeschate brought up his half-century from 21 deliveries. The hard-hitting all-rounder celebrated his knock by scoring two sixes and a four off the first three balls of following over which took the Volts past the 200-run mark. The Scorchers then had something to smile about as Ten Doeschate was dismissed in the same over.

Broom was undetered and slammed the fifth and sixth six off his innings in the penultimate over to bring up his 51-ball century. 21 runs were taken from the over with one over still to play. The New Zealand outfit eventually finished on with Broom unbeaten on 117 from 56 deliveries.

Man of the Match: Neil Broom