An all-round performance from the Otago Volts helped them register a massive 62-run victory over the Perth Scorchers in the Group A fixture of the Champions League T20 2013 in Jaipur. Following Neil Broom's sensational century to guide Volts to a massive total of 242, the New Zealand outfit ensured that the Scorchers were never in the chase by picking up early wickets. 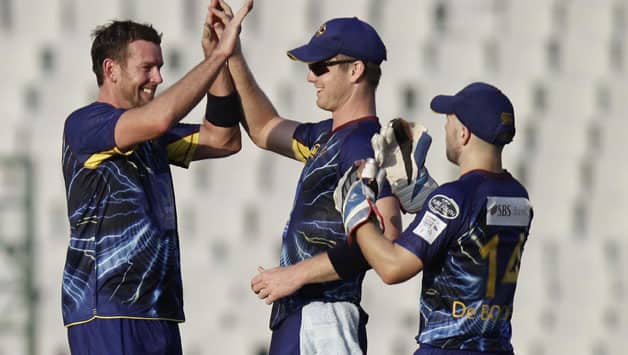 The Otago Volts restricted the Perth Scorchers to 180 for six to register a massive 62-run victory in the Group A fixture of the Champions League T20 2013 in Jaipur. Following Neil Broom’s sensational century to guide Volts to a massive total of 242, the New Zealand outfit ensured that the Scorchers were never in the chase by picking up early wickets.

After posting a total in excess of 200, the Volts had the perfect start in the second essay as the Perth Scorchers’ opener Liam Davis guided the first ball of the innings straight down Hamish Rutherford’s throat at third man.

Skipper Simon Katich was out in the middle with no run and a wicket on the board and had a herculean task ahead of himself. At the other end, he had the young Ashton Agar for company who opened up in the first over and cleared the infield on the off-side to collect a couple of runs and then cleared his front foot and slammed a full delivery for a six over long on. However, Agar went for one shot too many and a top-edged a short delivery.

The ball went high but wicketkeeper Brendon McCullum got under it to send the youngster back to the pavilion. The misery for the Scorchers continued as a run out in the second over sent back Katich for a diamond duck and reduced the Australian outfit for 11 for three in the second over. A misunderstanding between the batsmen found Katich short of his ground when a direct hit.

Hilton Cartwright and Adam Voges tried to resurrect the Scorchers’ innings after early setbacks. The duo added 65 runs for the fourth wicket and took the team to 74 for three at the half-way stage. They still needed 169 runs to win from the remaining 60 deliveries.

In the following over, Voges was dismissed by Nathan McCullum  as the former hit the ball straight to Butler at deep midwicket. Cartwright meanwhile, held the fading interests of the few supporters left in the stadium by hitting a six and a four of two consecutive deliveries in the 14th over.

New man Ashton Turner joined in as he slammed a six off the first ball of the following over. Turner’s innings soon came to an end when he was caught and bowled by Butler in the 16th over. Tom Triffitt walked out next and picked up a six and a four off the first two balls he faced. It was the same over when Cartwright brought up his half-century. With 102 required from the remaining 24 balls, Cartwright was still not ready to give up. He whacked Neil Wagner for a six in the first ball of the following over but Wagner came back well and gave away just four more runs in the over.

Cartwright finished unbeaten on 73 but the Scorchers failed to match up to the required run rate right from the start and eventually fell short of the target by 62 runs.

Man of the Match: Neil Broom

Kraigg Brathwaite, Kirk Edwards take West Indies A to 264/5 on Day 1 of 1st unofficial Test against India A

Sportstar Trophy: Play abandoned on Day 2 due to rain