Sunrisers Hyderabad will clash against Brisbane Heat in a make-or-break Champions League Twenty20 match in Ahmedabad on Monday, the outcome of which will decide if the Shikhar Dhawan-led Indian outfit can still be in race for a semi-final spot. 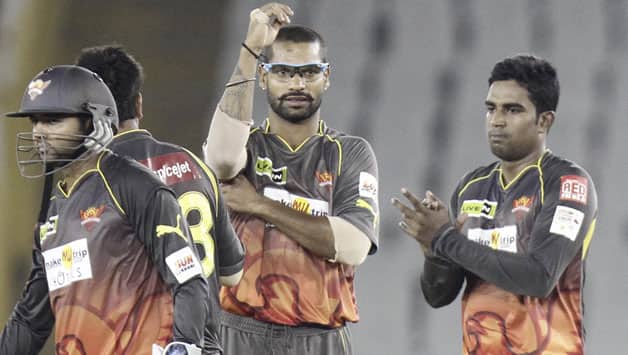 Sunrisers Hyderabad will clash against Brisbane Heat in a make-or-break Champions League Twenty20 match in Ahmedabad on Monday, the outcome of which will decide if the Shikhar Dhawan-led Indian outfit can still be in race for a semi-final spot.

Sunrisers would have to win this match by a huge margin if they are to stand any chance of qualifying for the last-four stage, provided Trinidad and Tobago win against Titans and then lose to Chennai Super Kings in their last group match.

Brisbane Heat, on the other hand, are already out of contention with not a single win from three matches. No combination of results will help Brisbane Heats make the semis, who would look to spoil Sunrisers’ party and end their miserable campaign with a consolation win.

With one win and two defeats, Sunrisers are also staring down the barrel with only four points from three matches and a net run-rate of -0.622.

They started their campaign after qualifying for the main draw of the Champions League with a spirited performance against Trinidad and Tobago in their tournament-opener before losing the plot against Chennai Super Kings and Titans.

Sunrisers suffered a crushing eight-wicket defeat against the South African side Titans in Ranchi last night.

Sunrisers’ bowling department, which was known to be one of their biggest strengths, has let them down heavily with the likes of Dale Steyn, Ishant Sharma and leg-spinner Amit Mishra failing to fire in unison.

Mishra has only been able to pick up one wicket so far while the pacers have leaked runs with the only exception of Steyn. Sri Lankan all-rounder Thisara Perera went for 60 runs in his three overs against CSK.

The bowlers would be keen to make quick amends ahead of the important tie.

The Sunrisers undoubtedly would rely on their explosive skipper Dhawan, besides opener Parthiv Patel to provide them a solid platform as had been the case against CSK and Titans.

Middle-order batsman Darren Sammy, who top-scored with 25-ball 50 against CSK but failed to fire against Titans, will be another key player while the team would expect JP Duminy and Thisara Perera to rise to the occasion.

Talking about winless laggards Brisbane Heat of Australia, they have nothing to lose and only their pride to play for with three defeats in as many matches.

The depleted Australian outfit, which failed miserably with the bat in the games against Trinidad & Tobago, Titans and CSK, will be expecting its batsmen to show more responsibility.

They lost to CSK by eight wickets last night as the IPL finalists chased down a modest target of 138 runs with complete ease.

Brisbane would hope that captain James Hopes, who has plenty of international experience having also captained IPL side Delhi Daredevils, gives them a solid start along with Burns.

Besides, all-rounder Dan Christian will also have to carry the batting burden. Chris Lynn, the big-hitting middle-order batsman, is another player who can make an impact.

The bowling unit has done well so far but have found little or no support from the team’s batsmen.