Titans defended 123 against Brisbane Heat in the Group B encounter in the Champions League Twenty20 2013 (CLT20 2013) at Mohali on Tuesday, winning the game by four runs. 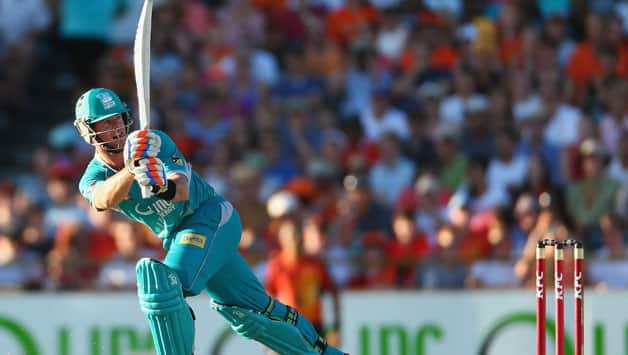 Titans defended 123 against Brisbane Heat in the Group B encounter in the Champions League Twenty20 2013 (CLT20 2013) at Mohali on Tuesday, winning the game by four runs.

Defending a modest total of 123, Titans’ only chance was to pick up early wickets. They did exactly that with Rowan Richards picking up Joe Burns off his first delivery [third over of the innings]. Burns was put under immense pressure, playing six dot balls. He looked to breakfree charging Richards off his first delivery and skying the ball trying to go for a lofted shot first up.

James Hopes and Peter Forrest looked comfortable until the latter was unsettled by the pace of Marchant de Lange. The tall Titans bowler beat Forrest for pace, who tried to work the ball towards on-side. He got the leading edge and was caught at square-leg. Ben Cutting tried to hit his way out of trouble trying to go for an impetuous slog off his second delivery. He went for a lofted shot but ended up giving a simple sky height catch to Jaques Rudolph at covers. With three down for 24 in five overs the match was finely in balance.

Hopes and Dan Christian took charge of the situation and prevented any further damage. The duo looked to rotate the strike and looked to take calculated chances. Christian looked ominous when he clubbed David Wiese for a six over long-off. Hopes played the role of a sheet anchor in the partnership. At the halfway stage the Titans needed 72 to win, with seven wickets in hand. Titans bowlers kept the bowling tight and the batsmen couldn’t find easy boundaries.

Needing 56 off seven overs, Christian attempted a big shot against Richards who came back for his second spell. His innings was nipped in the bud prematurely and Heats’ required run rate was going up exponentially. In the next over, de Lange conceded seven courtesy of a misfield by a boundary rider which resulted in extra three runs. With 46 needed off final five, Richards gave away only five.

Hopes was not timing the ball and his agony was over when he gave long-off an easy catch off van der Merwe. He scored 37 off 44 balls. Heats were losing the plot and shot-making was difficult. It was due to the slowness in the wicket and also due to the variation of pace by the Titans bowlers.

Heats needed 35 off the final three. The over started with Chris Hartley hitting the first ball from Wiese for a boundary. Off the third delivery, Chris Lynn was caught at sweeper cover.

Chris Sabburg changed the course of the game hitting two consecutive boundaries off Wiese. Morkel dismissed Hartley in the penultimate over but Sabburg smashed Morkel over mid-wicket for a six.
Heats needed 10 off the final over. Sabburg was run out off the first ball attempting to take on the arm of van der Merwe from deep mid-wicket. He was run-out and the balance tilted in the favour of Titans. Marchant de Lange was the pick of the bowlers picking three for 13 off four overs.

Earlier, Titans scored 123 thanks to the innings of 39 by skipper Henry Davids. At the halfway stage they were 72 for two , but the South African side lost the plot in the end overs. Needless run-outs of Davids and AB de Villiers pegged them back considerably. Matthew Gale, who replaced injured Kemar Roach,  was the most impressive bowler picking four for 10.

For the second time in two matches Brisbane Heats made heavy weather of a modest run-chase. Titans won their first game and kept their hopes of a semi-final berth alive.