Dolphins lack international players in the side but are upbeat after Ram Slam win.

Australia’s Perth Scorchers, boasting many a proven performer in their ranks, will start as favorites when they take on South African team Dolphins in a clash of two non-IPL teams in the Champion League Twenty20 2014 (CLT20) on Saturday.

For the Scorchers, a lot will depend on Adam Voges and the top order batsman will look to come good on the Mohali track. Mitchell Marsh has the ability to tear apart the rival bowling attack.

The Australian side also has experienced campaigner in Brad Hogg, who seems to be getting better with age. Nathan Coulter-Nile has shown already his all-round abilities and can prove useful for the team.

On the other hand, Dolphins, apart from Kyle Abott and skipper Morne van Wyk, have little known faces in their side that include players such as Craig Alexander, Cody Chetty, Cameron Delport and Keshav Maharaj.

However, not having big names in world cricket doesn’t dampen the sprits of Dolphins. “We are really looking forward to the challenge up ahead. Our intention is to come here and win this trophy and win this tournament. I think its important that we approach that (championship) in that way and play in a certain way that we feel we can achieve that goal,” Dolphins coach and former South African all-rounder Lance Klusener told reporters earlier. According to Klusener, Saturday’s opening tie presents an “awesome” opportunity for their young team.

The Former South Africa wicketkeeper-batsman and team captain Morne van Wyk (35) said that his team is looking at everyone to contribute. “There is not one (player) in particular. We won the tournament back home where everybody contributed. We need everyone to chip in and that will be okay.” 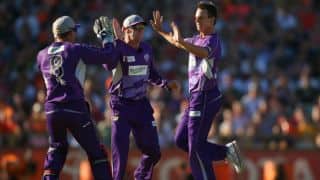