I think those guys deserve all the credit tonight, they set the things for us and kept Hurricanes on what was a par score," Bailey said.

Kings XI Punjab skipper George Bailey has credited his bowlers for setting up a five-wicket victory against Hobart Hurricanes in their campaign opener of the Oppo Champions League Twenty20 here.

Left-arm spinner Akshar Patel (1/20) along with seamers Parvinder Awana (1/25) and Thisara Perera (2/17) helped Punjab restrict the Hurricanes to 144/6 after Bailey won the toss and invited them to bat.

Giving credit to his bowlers, Bailey said, “It was a great start by our bowlers, really really proud of the way they started because a bit has been written about how they went in the IPL.

“I thought they bowled exceptionally well tonight (last night), their plans were outstanding, they executed their plans really well, at the start and in the end, which are the two most difficult times to bowl.”

“I thought Anureet and Parvinder Awana led the way and Akshar Patel did what he always does, but our two quicks (Perera and Awana) were outstanding, Thisara was outstanding.

I think those guys deserve all the credit tonight, they set the things for us and kept Hurricanes on what was a par score,” Bailey said.

During their chase, Kings XI were reduced to 51/4 before Glenn Maxwell hammered 43 runs off 25 balls to turn things around for the home team. Thereafter, Bailey (34 runs of 27 balls) and Thisara Perera (35 off 20) shared a blistering 69-run stand to make short work of the target in 17.4 overs. 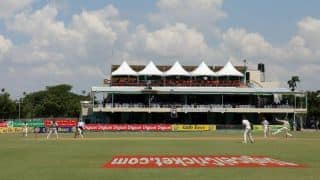 West Indies Cricket Board and WIPA sign a new agreement