KKR are chasing 141 to beat Hobart.

Earlier, Xavier Doherty won the toss and elected to bat first. Tim Paine was ruled out due to an injury. Thus Doherty captained. Hobart brought in Dom Michael in place of Paine. Kolkata Knight Riders were unchanged. Though Hobart struggled for a major part of their innings, Shoaib Malik kept them in the hunt and his unbeaten 66 took Hobart to 140 for six. 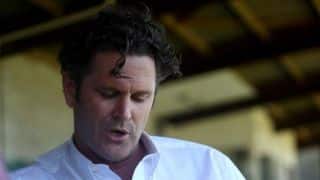