In 11 overs, Hobart Hurricanes are 58 for three.

Kolkata Knight Riders have taken complete control of the Champions League T20 (CLT20) 2014 semifinal against Hobart Hurricanes. In 11 overs, Hobart are 58 for three with Shoaib Malik and Ben Dunk batting in the middle. It has been tough going for them so far with the spinners on and they would reply on Malik to do the job for them. Click here for the live blog

Hobart need a push in the last nine overs, but they have three overs left from Sunil Narine, two from Kuldeep Yadav and three from Piyush Chawla. It is n0t going to be an easy ride by any means.

Earlier, Xavier Doherty won the toss and elected to bat first. Tim Paine was ruled out due to an injury. Thus Doherty captained. Hobart brought in Dom Michael in place of Paine. Kolkata Knight Riders were unchanged. 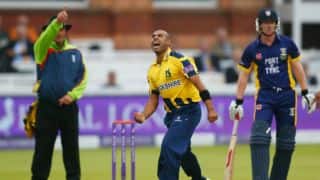