Tridents will look at each individual player to contribute to make a fighting contest.

Hobart Hurricanes will start as favourites when they take on the winless Barbados Tridents in a Group B encounter of the Oppo Champions League T20 (CLT20) 2014. With two wins from three games, the Aussies come into this match after a huge win over Northern Knights whom they had bundled out for a paltry 92 while chasing 178.

Prior to this, Hurricanes won by six wickets against Cape Cobras. Their only loss has been against IPL finalists Kings XI Punjab here 10 days back. The biggest positive for the Aussie side has been the masterly batting display by in-form batsman Aiden Blizzard, who is the top run getter with 167 runs while strike bowler Ben Hilfenhaus is also in good form with six scalps so far.

Unlike their Caribbean opponents, the Hurricanes have other star players in their side including Tim Paine, Shoaib Malik, Doug Bollinger, besides Ben Dunk, Xavier Doherty and Cameron Boyce, making it a balanced side. On the other hand, the Tridents, who endured a heart-breaking loss to Cape Cobras here on Friday, will now look to earn their first win. They were outwitted in a thrilling ‘Super Over’ contest, with Mohali once again not turning out be a happy hunting ground for the West Indians.

Chasing a fighting target of 175, Cobras could only manage 174 for five to tie the scores. Jonathan Carter showed his superb form scoring a brilliant unbeaten 111 for Tridents, but that went in vain as the South African outfit came up trumps in a pulsating affair in the eliminator here yesterday. Carter and Sri Lankan import Dilshan Munaweera, who scored 42 in the previous game, were impressive with their batting. Jeevan Mendis has also been among the wickets and has bowled superbly.

Desperate to notch up a win, the Tridents will look at each individual player to contribute to make a fighting contest. Earlier, the Tridents suffered a loss at the hands of Kings XI Punjab here. Despite posting a challenging total of 174 for six, riding on twin half-centuries by Dilshan Munaweera (50) and Raymon Reifer (60), the Tridents failed to contain KXIP. 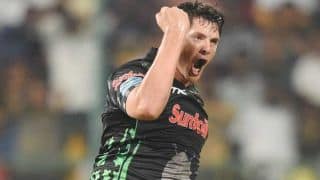