Hafeez started off slowly but shifted gears towards the end to take Lahore Lions to a solid total.

Lahore Lions skipper Mohammad Hafeez is glad that he could play a match-winning knock in a crucial game against Southern Express as the victory kept his them in hunt for a place in the main draw of the Champions League T20 2014 (CLT20) tournament on Tuesday.

“I think the victory was much needed. To be honest you all knew how important it was. We wanted to set a good total early. After losing three wickets, we were bit under pressure because we wanted to set a target and put pressure to the chasing side. The one over (from Prasanna) changed the complexion of the game.

“Someone had to take the responsibility, whoever have played that someone has to do that thanks to almighty that was me,” Hafeez said at the post match press conference.

Hafeez, who was adjudged man of the match, added, “We wanted to bat early. We have a good bowling side. It was blessing in disguise we lost the toss. Even though we would have won the toss, we wanted to bat first.”

Hoping to progress in the main draw of the contest Hafeez said that his team has done what they wanted to do and is hoping that the best team should qualify for the next round. 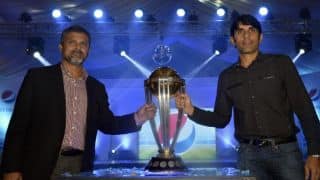