Hafeez said they had a defendable total on the board but blamed it on the miss chances.

Lahore Lions skipper Mohammed Hafeez blamed the fielders after losing to Kolkata Knight Riders in the ongoing Champions League T20 (CLT20) on Sunday at Hyderabad. He said they had a defendable total on the board but blamed it on the miss chances by the fielders for losing the match.

“We got the target we wanted to. 150 on this pitch with the way the ball was turning. Fielding was not up to the mark. We did not take some chances. Still it was a good show, youngsters are learning every game, we have to give them confidence, they will do well. Shehzad was magnificent. Narine bowled well,” he said.

Lahore will next play another Indian side Chennai Super Kings (CSK) in their next game in the main stages of CLT20 2014 on September 24, in Bengaluru. 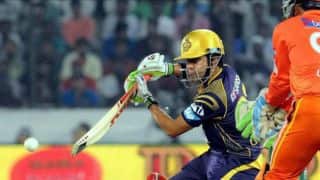